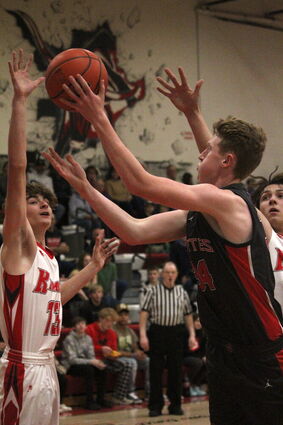 Potter-Dix senior Zach Rotert was a force under the boards against Kimball last Tuesday.

Potter-Dix's Coyote Boys Basketball team has been dominant so far this year, but if it has a weakness, it is a tendency to build a lead and let opponents rally back during the second half.

Last Tuesday, January 10, the Coyotes traveled to Kimball to take on a resurgent Longhorns team. Potter-Dix opened sharp and fast, cutting through the Kimball defense and scoring while playing tough defense. After opening a 13-to5 lead halfway through the first period, the Coyotes turned it on and put up 11 more points while the defense continued their great play, giving the Coyotes a 24-to-12 advantage after the first period. The offense slowed in the second quarter and Kimball found a groove, chipping away at the lead until the teams went into the break with the score at 34-to-25. But then Potter-Dix cooled off in the third period while Kimball started to rally. A big 21 point quarter had the Longhorns take the lead, but it was short lived as Potter-Rallied back in the fourth quarter, putting up 20 points and sealing the 64-to-57 victory.

Next up was a rivalry game, and the Coyotes made the trip to Dalton to face the undefeated Leyton Warriors. Potter-Dix started out strong and built a lead, but Leyton settled in in the second quarter and started to score consistently. The teams went into the half with Potter-Dix leading 25-to-19, but the third had Leyton pick up the scoring pace while Potter-Dix struggled on defense. Leyton took the lead and never looked back, shutting down the Coyote offense and holding them to just 5 points in the fourth quarter, and held on to earn the 53-to-48 victory and stay unbeaten.

Prior to the Potter-Dix matchup with Hay Springs, Head Coach Cory Michelman said, "We've had a struggle with consistency and playing with a lead. We had a lot of game cancellations due to weather on top of the Winter Break, and the boys haven't been able to get into a rhythm." The Coyotes shook off the previous nights' loss and came out strong in their game with Hay Springs, building a 40-to-21 lead at the half, and there was no let-down in the second half as the team put up another 31 points to take the 71-to-50 victory. Senior Luke Kasten led the scoring for Potter-Dix with 21 points. The Coyotes were scheduled to start the MAC Tournament on Tuesday with a match up against Banner County.