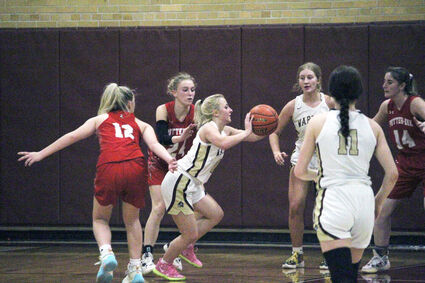 Leyton sophomore Kaydence Haupt and the fast Lady Warrior passing attack was too much for the Potter-Dix squad to handle.

Leyton's Lady Warrior Girls Basketball team bounced back from a loss to Bayard with a 30-point humbling of rival Potter-Dix on their way to a first-round matchup with Garden County in the MAC Tournament on Thursday.

The Bayard Lady Tigers have been very strong this year, and the Lady Warriors knew they would be in a fight going on the road. The game itself was tight, with neither team able to pull away from the other. But the Bayard girls were able to get a few more shots to fall then their Leyton rivals, and took away a 45-to-40 victory. Bayard shot 41% from the field and pulled down 27 rebounds in the victory.

Head Coach Jed Benish got his squad focused for the next night's matchup with rival Potter-Dix. Although the Leyton squad has performed much better than the Potter-Dix girls so far this season, when these teams meet there's always the potential for fireworks and upsets. A slow scoring beginning of the game eventually turned and Leyton started to control the game. Potter-Dix fought hard, but too many turnovers and missed shots enabled Leyton to pull away and take a 51-to-21 victory. Leyton next faces Garden county in the first round of the MAC Tournament on Thursday.