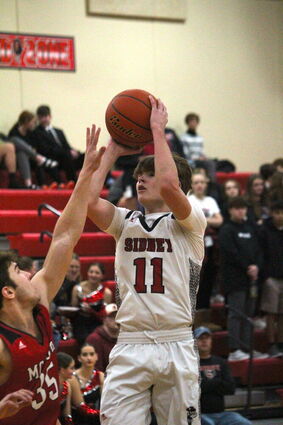 Sidney senior Jaeden Dillehay has been steady and consistent in his offense, leading the Red Raiders in scoring in all three games over the past week. Sidney looks to get back on the winning track against Gothenburg on Friday.

Sidney Red Raider Boy's Basketball team has had a very strong start to the 2022-23 season, chock full of big wins and jumping out to an 8-and-2 record. But the Sidney squad had a rough past week, starting with an easy win against Mitchell, then suffering two tough losses to Ogallala and North Platte.

Last Tuesday's contest against Mitchell was similar in outcome to their first meeting at the Sidney Holiday Tournament at the end of December, with the Tigers unable to change their fortunes by playing Sidney at home in this contest.

The Raiders jumped out early, playing fast and loose on offense while clamping down on defense to open a big 21-to-4 lead at the end of the first period, and never looked back. Sidney had 12 players in the scoring column by the end of the contest, which ended in a 66-to-25 drubbing of the Tigers. Senior Jaeden Dillehay led the scoring for Sidney with 11 points in the win.

On Friday night, it was a different story as the Raiders hosted the 12-and-0 Ogallala Indians. Ogallala started the game with a tough pressure defense that stymied the Red Raider offense, and the Indians opened an 11-to-2 lead and Sidney never threatened for the entire game. Sidney was able to hang in and stay competitive, but it seemed every time the Raiders went on a good run, the Indians answered right back to keep Sidney comfortably behind. The Raiders could not manage a fourth quarter rally, and fell by a final score of 74-to-58. Sidney managed to get three players scoring in double figures in the contest, with Dillehay leading the way with 19 points. Junior Isak Doty had 17 points and sophomore Landon Riddle scored 11 points in the loss.

On Saturday the Raiders packed their gear and traveled to match up with a tough Class A team in the North Platte Bulldogs. The Bulldogs are a very tall and experienced team, with a roster loaded with juniors and seniors and multiple players over 6' 5". Even with the height disadvantage, the Red Raiders battled hard under the boards and held their own. But the Bulldogs' tall sharpshooters were able to beat the Sidney defense and shot well from the field, as well as beyond the three point arc. North Platte senior River Johnston devastated the Red Raiders by knocking down a school-record nine three-point shots on his way to a 33 point game. Although Sidney held an early lead on the strength of two three-point hits of their own, it didn't take long for the Bulldogs to get their rhythm going and start to score. By the end of the first quarter, Sidney trailed by eight points, and the Bulldogs pushed the lead to 12 points at the half.

The Red Raiders were able to hang around through the second half, but never cut the deficit to less than nine points as the Bulldogs continued to score and took an 84-to-59 victory over Sidney. Dillehay again led the scoring for Sidney with 19 points. The week's action moves Sidney's record to 9-and-4 on the season, and they look to get back into the winning column when they travel on Friday to match up against the 7-and-5 Gothenburg Swedes.