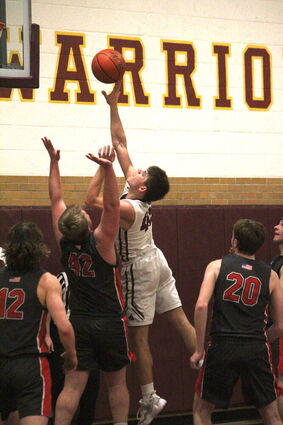 Leyton senior Justin Ernest battles inside and puts up two points during the Warriors' victory over Potter-Dix Friday night.

The Warriors first defeated Bayard on the road on Thursday, building a big lead in the first half on their way to a 58-to-39 win. Senior Dillon Juelfs led the offense with 24 points in the win. On Friday night, the Warriors withstood a strong first half by Potter-Dix then bore down and ground out a rally, passing by the Coyotes late in the third period, then shut down the Potter-Dix offense to defeat the high-powered Coyote team 58-to-39. It was a great win by the Warriors, showing they can match up with a fast, athletic team with length, and play a full four quarters of basketball without wavering.

Juelfs and junior Johnathan Kruse each had 16 points in the win, and senior Cort Rummel had an outstanding game, scoring 10 points directing the offense while playing solid defense, forcing turnovers and errors, and seemingly involved in every big play.