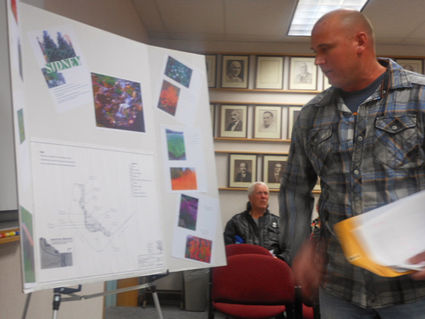 Korey Stanley of Peeley Irrigation, presented his ideas of different proposals for the South Entrance Project last night at the City of Sidney City Council meeting with the idea of a ‘HOLLYWOOD’ type of sign for the entrance.

Can landscaping help put Sidney on the map? At last night’s meeting of the City Council, the answer seemed to depend upon a dollar amount.

Both Korey Stanley of Peeley Irrigation, and B.J. Raffelson of Raffelson Rock Co. presented their proposals for the South Entrance Project meeting. The project is planned for the corner of the intersection at 11th Avenue and Old Post Road.

A gas station is in the process of being built adjacent to that land and Wamsley Development gifted the city approximately 1.5 acres to create a landscaped sort of entryway into the city.

“In gifting us 1.5 acres on the corner out there, what they asked in return was something that the community has talked about previously and it was talked about in our comprehensive plan,” said Gary Person, city manager.

“That would be to have some kind of signature statement of landscaping at that particular corner that would be something significant of entering Sidney between the interstate community and the downtown area and something that would be very appealing.”

Person said that for another project city workers ran additional infrastructure nearby the land when they ran utilities to the interstate.

He said that however some of the infrastructure had not followed “the right of way that had been designated.

“So to be proactive on that, the Wamsley family designated to gift that land to the city so we wouldn’t have to go through the expense of actually relocating those utility lines and running sanitary sewer out there. It gives us more flexibility in being able to do that as well,” said Person.

The city manager said that the budget agreed upon allocated $85,000 for some significant landscaping around the area and that his team was contacted by professionals in the community interested in putting in some kind of design and proposal.

The two companies that submitted proposals were Stanley’s and Raffelson’s.

Council member Mark Nienhueser questioned whether the method of obtaining the bids was legal and about the amount that was projected.

“I think both of these are over the budgeted $80,000 for the project,” said Mayor Wendall Gaston.

“I have put a lot of time in and I’m sure B.J. has to,” said Stanley. “I mean if it’s something that is possibly not even going to happen then I don’t really want to waste more of my time.”

Stanley said that he was never told a budget amount for his project ideas and that he had only heard a rumor of $85,000.

When Stanley began his presentation, he noted that he was never given a set plan of what community members would want the landscaping to look like so made one from scratch.

“We’ve done many motels and apartments and stuff. All our residential stuff we can draw up plans for,” he said. “For this I took it to a company in Fort Collins and worked with them to draw up a plan.

“It has about about 200 yards of top soil fill-dirt that we would bring in and raise up the flower beds along the curb and the backside of the gas station.”

Stanley continued that he was considering eight to nine foot water features and was looking into some that were very low maintenance - including dry ponds.

He noted there would be 300 feet of sidewalk that runs around the big berm area, sod, sprinklers and an assortment of trees and shrubs.

“We chose an assortment of trees and shrubs that would be colorful year-round, not just in the summer time,” he said.

As for the Sidney sign that he was asked to draw up, Stanley said his plan included acrylic letters approximately four feet tall.

“It would be sitting up on the hillside, kind of like the letters HOLLYWOOD. There would be letters up on the hill right to the side of the waterfall, right in front of the green evergreen trees,” he said.

Stanley continued that it would require approximately 45,000 square feet of sod for the big area and that the budget is flexible.

“If you want something for $80,000 you can put sprinklers and sod down and maybe a couple trees.

“If you want something that looks nice – signs, lighting, path lights for the sidewalk, trashcans – that was all included on the bid price,” he said.

Arterburn asked about what maintenance would be need for the water feature and Stanley responded that there would be a three-year warranty on sprinklers and the water pump.

“As long as the pump is running there isn’t any real maintenance to it,” he said.

Arterburn brought up the idea of having the official Sidney logo for the sign and Stanley responded that anything with the sign could be changed.

“If we have a general concept and you are comfortable with hiring one of the design professionals,” said Person, “the city could purchase a lot of these things and hire the design professional for ‘X’ amount of dollars to help install and design it and go from there to make sure we aren’t in violation of any open bid.”

Raffelson also presented his ideas and noted that he teamed up with an architect in Denver for the design ideas.

“What really caught my eye was a large water feature,” he said. “One is about 12 to 16 feet tall with a sign above it.

“My thought is the same kind of concept with trees in the background and a ‘Welcome to Sidney’ sign that would be lit up at night with a water feature.”

Raffelson also said that a pond-less water feature would make more sense due to the idea of less maintenance and less of a liability for the city if people were to fall in a pond.

He continued that he researched the state flower and tree to try and incorporate them into the design, and said that he also preferred evergreen trees for their year-round color and appeal.

“My main thought on the whole thing is to make it big enough where people drive by on the interstate, see it and say ‘Wow. What does this town have?’” said Raffelson.

“It needs to be eye-catching and make them say ‘I want to pull over and see what this is all about.’”

Raffelson said that his ideas were to make it park-like with rock sitting areas, pathways, and other elements that will make them stop and wonder what is further downtown.

“Getting them off the interstate with eye appeal can make them stop at a gas station, Cabela’s, a hotel and even downtown.”

He said that he was thinking about native grasses such as buffalo grass for the area and native flowers, with the inclusion of sprinklers for dryer summer months.

Raffelson also had an idea of including a digital type reader-board next to the interstate to give dates and information to residents and those passing through town who may be unaware of events. His idea was that advertising through the board could help pay for expenses.

“Right now I think there are so many ideas that you could go either way with on this entire thing,” he said.

Nienhueser said that he believed there were good ideas from both companies. 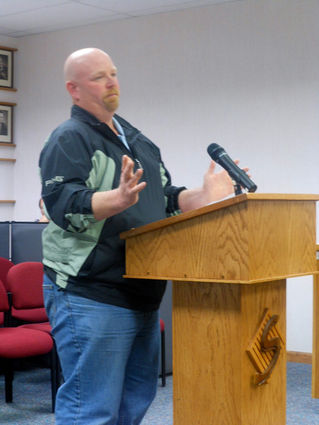 B.J. Raffelson of Raffelson Rock Co. presented his ideas of different proposals for the South Entrance Project last night at the City of Sidney City Council meeting with the idea of attracting interstate travelers to see what Sidney has to offer.

Arterburn reiterated the importance of keeping the letter and logo consistent with signs already throughout the city to keep the same city branding prominent.

Nienhueser agreed and said that the sign needed to be iconic.

The council member also said that he then remembered that the budget was just set to get project ideas going, and that other potential sources for funds had been mentioned previously.

“We’re Sidney and we like to do things right, and this could be the number one thing to introduce people to Sidney when they come in,” said Gallaway. “I think it’s worth the time and attention we can give to it.”

The matter was tabled until details are clarified and the members are informed that they can proceed in making a decision.