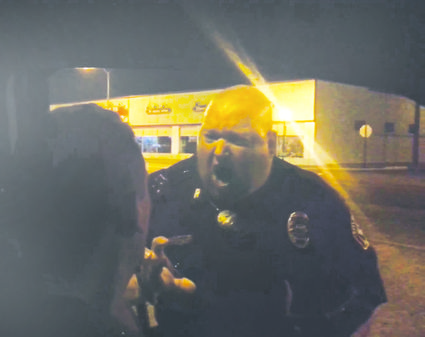 A Sidney police officer was caught on video last weekend yelling profanities at a citizen.

The YouTube video documenting the incident features Sidney police Officer Scott Tobler and Sidney resident Stephen Bell, who taped the altercation. The video has tallied more than 29,000 views so far.

It starts as Bell and his wife sit in his vehicle across from the hardware store at 11th Avenue and Illinois Street. A police scanner is audible in the background. Bell advises his wife that she doesn't have to give her identification to the police since she had not committed any violation.

In the video, Officer Tobler then approaches Bell's window and asks for his license, registration and insurance. Immediately Bell asks the officer if he is suspected of a crime and informs Tobler that he's being recorded. The officer retorts that Bell is being recorded as well.

"Why are you constantly following us?" Tobler asks.

Throughout the video, Bell repeats that he doesn't have to answer any questions without a lawyer present. Tobler then informs the pair that he'll arrest Bell for obstruction the next time he follows the officer to a crime scene or traffic stop, implying that the couple had passed them several times as their dealt with an incident.

Bell and his wife continued in the clip to disagree with Tobler over whether or not they are obstructing justice.

At that point, tempers apparently begin to rise. Officer Tobler becomes visibly agitated and throws what appear to be Bell's identifying documents back into the car.

"Stop following us around," he yells in the video. "That's your last warning."

Tobler then turns to the camera, recites his name and badge number then shouts explicatives at Bell.

At this point Officer Curtis Hofrock, who has mostly stayed out of the argument, edges Tobler away from the car and tells him "That's enough."

Hofrock calmly asks Bell to go. Bell tells Hofrock that he'd like to file charges for assault. Hofrock offers to get the information and forward it to Major Aikens.

Thus ended the YouTube clip, though not the controversy.

If someone is following police and is distracting attention from the officer's duties, one could argue that this counts as obstruction, said Cheyenne County Attorney Paul Schaub. In most cases when charging someone for assault, the incident must involve pain, Schaub continued. At this time there isn't enough information to determine if obstruction or assault occurred in this particular case, Schaub said.

Bell claimed that he went to the crime scene that Tobler was investigating last weekend after hearing about it on the police scanner he keeps in his vehicle. Bell drove past the scene several times before parking around the corner, but Tobler yelled at him to go home the first time he passed, Bell said.

Bell has had trouble with the Sidney police for a while now, he claimed.

"Basically, I've been harassed by the cops for two years," he said in a phone interview.

He's filed complaints with Major Aikens and the Nebraska Attorney General, he said.

"I'm tired of being targeted for no reason," Bell continued.

According to Bell, he was arrested for child abuse a few years ago, but the charges against him were dropped for lack of evidence. In a related incident, his wife's children were temporarily taken away from her. She currently has a lawsuit against the city, Bell said.

Police began following Bell around the time of these incidences, he claimed

"It's not illegal for me to do the same to them," he said.

Bell insisted that police often drive past his home and turn their cameras toward him.

"I'm not out for this officer," he said. "I just want them to leave me alone. I haven't done anything."

Bell alleged that police harass him, even when they're off duty. If he has interactions with police he video tapes them for his own protection, he continued. His Youtube video is titled “Sidney, NE Police officer flips out.” It was received multiple times in this office by email. Other media outlets have reported the incident, as well.

"I'm not looking for fame," Bell said. "I'm looking to be left alone."

Bell was adamant that he didn't necessarily want to get Officer Tobler in trouble.

"I'm not saying that every cop is bad or that this guy is bad," he said.

Bell was contacted Monday afternoon by an official in the Sidney police department about an internal investigation involving the incident.

At this point the video has received more "thumbs down" than

"thumbs up" on social media sites. Some of the comments started a dialogue about the First Amendment rights of citizens verses the rights of police officers to do their jobs without being harassed or provoked.

"I would agree that the officer could have used greater restraint," Schaub said.

It's interesting that someone would have time to follow police around while they're doing their jobs, he added.

Interim police chief, Joseph Aikens would not comment about the incident or any circumstances surrounding it except to say that it's under department investigation.