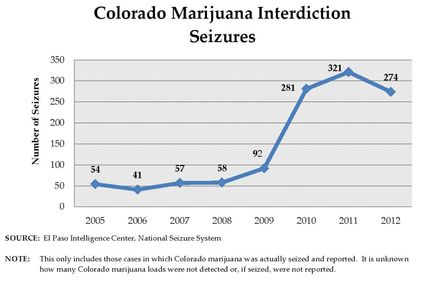 Local law enforcement already claim that medical marijuana legalization in Colorado led to an influx of the drug in surrounding areas, but with the upcoming switch to sales of legal marijuana to those over 21, agencies are worried the problem will grow.

In 2012 there were 274 reported seizures of marijuana coming from Colorado on its way to other states. This compares to 54 in 2005—a 407 percent increase—according to the National Seizure System. Law enforcement officials voluntarily report seizures throughout the United States to the NSS. It should be noted that it is difficult to confirm the origin and destination of drugs in some instances, since many times investigators must rely on information from criminal sources.

"Yes, we're seeing a bigger impact, but by no means are we the only state that's seeing that impact," Jenson said. "There are several other states that are seeing large quantity seizures coming in."

Jenson admitted that there are individual marijuana grow operations around Cheyenne County, but products transported into the area from Colorado are more problematic.

"It's just so much more readily available than it was in years past," Jenson said.

"We're seeing the front row of it."

Many law enforcement agencies in Colorado are fighting drug trafficking along with those in Nebraska, but Jenson believes some jurisdictions don't speak out against it as adamantly as they should.

Colorado State Patrol has no way of tracking marijuana transported out of the state. The patrol is much more concerned about drugs coming into the state, said Trooper Josh Lewis.

"We obviously prefer that people keep it in state," Lewis said.

On average 2,220 pounds of marijuana left the state of Colorado from 2005 to 2008, compared to almost 4,000 from 2009 to 2012, according to an August report by Rocky Mountain High Intensity Drug Trafficking Area. The mission of Rocky Mountain HIDTA is to facilitate cooperation among federal, state and local law enforcement to combat drug trafficking.

There is no mandatory process for law enforcement to report either the seizure or the source of marijuana, therefore Rocky Mountain HIDTA contacted some law enforcement entities and requested voluntary reporting on the instances in which Colorado marijuana was seized in their jurisdictions.

In 2012, 7,000 pounds of Colorado marijuana destined for other states were seized. The top three source counties were Denver, Boulder and El Paso, according to the report.

Over the past year, authorities intercepted a number of people in possession, suggesting regular traffic between the states. In April of this year a Nebraska State Patrol Officer stopped a vehicle for a traffic violation and then uncovered a one pound bag of marijuana. The driver allegedly admitted to transporting the drug to Omaha at $200 per trip for a Boulder dispensary owner.

In January 2012, the Nebraska State Patrol stopped a vehicle traveling from Denver to Sioux City, Iowa. Almost two pounds of marijuana were discovered in the car. The driver allegedly admitted to visiting seven Colorado dispensaries in the course of a week to obtain the drug.

Last winter the Nebraska State Patrol responded to a vehicle stuck in the snow on Interstate 80. Troopers detected a strong odor of marijuana and found almost 10 pounds of the drug. This vehicle was allegedly traveling from Denver and was destined for Illinois.

"It's not just Colorado people bringing it out," Jenson said. "It's our people going to Colorado and bringing it back. It's a two way street."

He believes this causes economic hardship for all law enforcement involved.

"I think it has moved in and out of states for years," said Brian Vicente, the executive director of Sensible Colorado, a marijuana advocacy group.

He hopes that Colorado will serve as a model for other states to end the arrest of adults for possession of marijuana, allowing law enforcement to focus money and time on more severe crimes. Rachel Gillette, director of Colorado Norml, a marijuana reform group believes that criminalization comes at a tremendous cost in dollars and to those who end up in the prison system as a result of it.

Local law enforcement officers insist that possession of marijuana is just the start of something bigger.

"They're totally ignoring some of the raw facts that's coming out about the increase in gang violence and burglaries and thefts," Jenson said.

These crimes are all related to marijuana, he claims.

Jenson is adamant that with marijuana use and sales come a load of other issues. He believes that a larger criminal enterprise is tied hand in hand with the drug. Not everyone who smokes marijuana will lose a job, or steal or go on welfare. According to Jenson those problems will increase.

"If you don't actively, aggressively pursue it, it will consume the communities," Jenson said. "I will not tolerate it, and I don't believe the chief is gonna tolerate it."

Marijuana is present in the city of Sidney. Some local methamphetamine sales enterprises started with marijuana sales, he claimed.

Jenson believes that the sales of marijuana to those over 21 in Colorado, which will begin in 2014, will only add to the problem.

The goal of legalizing marijuana is to tax and regulate it and take it out of the hands of the drug cartels, according to Vicente.

This is similar to the close watch officials keep on pharmaceutical drugs, he added.

"As long as they are legitimate business people, the question is, how much and what goes out the back door?" Jenson asked.

Only in a perfect world would these regulations keep marijuana from traveling to other states, Jenson observed.

"There is robust oversight to prevent sale out the back door," Vicente said.

All shops selling retail marijuana must use the Marijuana Inventory Tracking Solution (MITS) to track the product from cultivation to sale. Any sales not recorded through this process would be considered severe criminal activity and could result in jail time and loss of a license.

"You just made it easier for the cartels to bring illegal drugs into the back doors of legal places," Jenson said. "I'm not saying that every legitimate business man in Colorado that has a marijuana dispensary is selling illegal narcotics out the back door, but there is a percent of them that are."

The Colorado Department of Revenue released a 136 page report outlining the rules for legal marijuana sales Sept. 9. According to HYPERLINK "http://www.colorado.gov/cs/Satellite?blobcol=urldata&blobheader=application%2Fpdf&blobkey=id&blobtable=MungoBlobs&blobwhere=1251883847085&ssbinary=true" HYPERLINK "http://www.colorado.gov/cs/Satellite?blobcol=urldata&blobheader=application%2Fpdf&blobkey=id&blobtable=MungoBlobs&blobwhere=1251883847085&ssbinary=true" HYPERLINK "http://www.colorado.gov/cs/Satellite?blobcol=urldata&blobheader=application%2Fpdf&blobkey=id&blobtable=MungoBlobs&blobwhere=1251883847085&ssbinary=true"the report, beginning Oct. 1, only existing marijuana dispensaries in good standing with current laws can apply for retail licenses. Only existing dispensaries will be able to apply for these licenses for the first nine months of legal sales to those over 21.

Although advocates hope that the new law will bring marijuana sales above board, there might be some incentive to stay in the black market. Marijuana that sells illegally in Colorado for $2,000 a pound might sell for as much as $4,000 a pound just across state lines and perhaps $6,000 a pound on the east coast, said Denver police Sgt. Andrew Howard, in a Denver Post article.

"Marijuana out of Colorado is having a local impact," said Nebraska State Patrol Sergeant Dana Korell in the HIDTA report. "It is just flooding the marketplace. It's everywhere."

Marijuana advocates believe that the laws put in place in Colorado are affective in preventing the drug from leaving the state.

"I think our regulations are written in such a way that they are trying to prevent that activity," Gillette said. "Hopefully we'll keep it in Colorado."

Those at Norml are proponents of responsible marijuana use.

"I always warn people," Gillette said. "It's not for other states. Other states can decide on their own. It's a very bad idea to take it across state lines."

Gillette offers the solution that other states should consider decriminalizing marijuana and ending prohibition as well.

"I think it's inevitable in the future," Gillette said.

Jenson does not believe that national decriminalization will happen in his lifetime.

"I want to believe that there's enough people in our country with common sense who can see through the smokescreen that's being presented," Jenson noted.

"The intention is to bring black market sales above board and regulate and tax it," Gillette said.

In August, HYPERLINK "http://www.huffingtonpost.com/2013/08/29/eric-holder-marijuana-washington-colorado-doj_n_3837034.html" HYPERLINK "http://www.huffingtonpost.com/2013/08/29/eric-holder-marijuana-washington-colorado-doj_n_3837034.html" HYPERLINK "http://www.huffingtonpost.com/2013/08/29/eric-holder-marijuana-washington-colorado-doj_n_3837034.html"Attorney General Eric Holder informed the governors of Washington and Colorado that the Department of Justice would allow states who legalized marijuana to move forward without interference, unless those states fail to keep the drug within their borders.

"The intent isn't to be a source state for other states," Gillette said.

Jenson believes that the problem is much larger than the use and sales of marijuana alone.

"I don't see anything good coming out of the legalization of marijuana," Jenson said. "I have a heartfelt belief that it's gonna be a very traumatic event that's gonna happen."