Lecher leads the way over Torrington 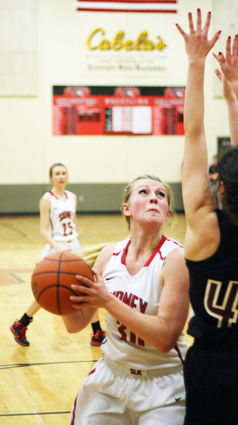 Annalise Lecher breaks through a screen on her way to two of her 13 points against Torrington (Wyo.) in the first round of the Cabela's Holiday Shootout. Lecher also went 7-of-8 from the free throw line and made five consecutive free throws in the third period.

The Sidney Lady Raiders pounded the Torrington (Wyo.) Lady Blazers last night in the opening round of the 2015 Cabela's Holiday Shootout, taking a 56-39 win to advance to the second-round.

The match with Torrington was a game of solid play from a pair of juniors – Kelsey Knight and Annalise Lecher.

The duo combined for 25 points and Lecher was 7-of-8 from the line, with Knight dropping two three-pointers in the second period.

The night of high-performing juniors continued as Abbey Mills scored six points off two booming three-pointers, including the opening shot of the match.