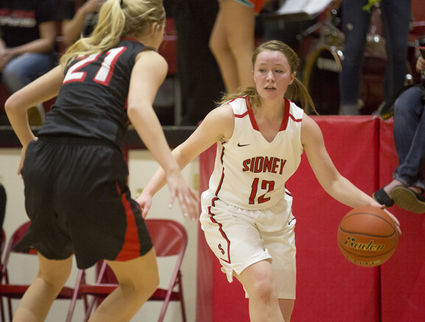 Emily Mahr, of the Lady Raiders, looks to move the ball against Chadron on Friday. Mahr had 10 points in the game.

The Sidney High Lady Raiders split a pair of weekend games. On Friday, Sidney lost in overtime to Chadron, 52-49, and on Saturday, the team defeated Hershey, 44-34.

The Lady Raiders (13-5) will play at Gering on Friday.

Against Chadron (14-2), Sidney dominated the first three quarters of play. In the final period of regulation, however, the Lady Cardinals overcame Sidney's lead and hit a 3-pointer at the buzzer to send the game into overtime. After trading scores on successive possessions, Chadron intercepted a Sidney inbounds pass and took the lead.