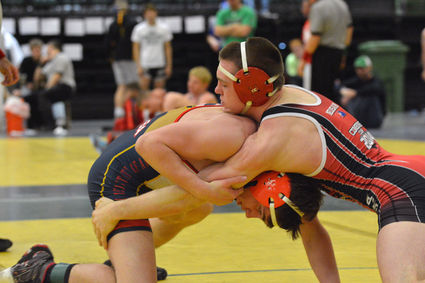 Shelly Peckham / For The Sun-Telegraph

Derek Robb, right, won AAU state in the 152 weight class over the weekend in Kearney. He also avenged his lone high school defeat at the tournament.

Three Sidney wrestlers competed at the AAU state meet last weekend in Kearney, and two of them earned berths to the AAU Disney duals this summer.

Both Arellano and Robb also qualified for the AAU national duals. Arellano will wrestle on the AAU freshman/sophomore national duals March 26-27 in Des Moines, Iowa.

In last weekend's meet, Arellano swept through his competition for a 5-0 record to win the 113 wei...