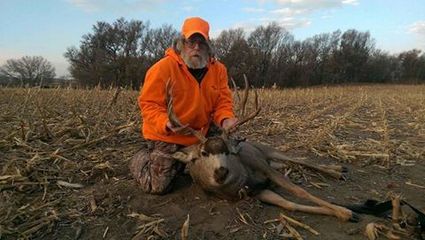 Andrew William Brown, 55, of Chappell, Nebraska, lost his hard-fought battle to cancer Sunday, October 9, 2016, in the University of Colorado Hospital in Aurora, Colo.

Andy Bill was born in Ogallala, Nebraska to Alan Charles Brown and Mabel Lorraine (Savage) Brown on July 26, 1961. He grew up in Ogallala and graduated from Ogallala High School in 1979. Andy was a mechanic and short-haul truck driver while the family lived in the panhandle.

Andy met Jan in 1982 and they were married on June 4, 1983. They had four children: Brant, Jennifer, Shelby and Shania. The family moved to Chappell in 1995, and Andy opened Brown's Service, an all-service mechanic shop, in 1996. Andy and Jan bought Premier Auto Parts in Chappell in 2014.

Andy was a devoted outdoorsman and instilled his love for trap shooting, hunting and fishing into his children. Many fond memories were made as the family spent quality time together on the trap range, in the field or on the water.

Andy had a passion for coaching and teaching. He coached his sons' baseball team, daughters' softball team, and was a volunteer umpire in Chappell; started the youth 4-H Trap Shooting Club in Chappell in which all three of his daughters shot; coached trap shooters in Chappell, Ogallala and Sidney and took countless kids to competitions all over Nebraska and Colorado. Andy taught Hunters Education and served on the 4-H Council for many years.

Preceding him in death was his father Alan, and sisters Lorrie Brown and Dyan Richardson.

Friends may sign the Register Book on Thursday, from 9 a.m. to 5 p.m. at Draucker Funeral Home.

The Funeral Service will be Friday, Oct. 14, at 10 a.m. in the Sidney Church of Christ with Dustin Rocha officiating.

Interment will follow in the Riverside Cemetery in Wauneta, Nebr. Online condolences may be sent to drauckerfuneralhome.com, from which the Service will be live streamed, for those unable to attend. To commemorate Andy's love of the outdoors, feel free to wear camouflage to the funeral service in his honor.

A memorial has been established in his name for later designation. Draucker Funeral Home of Ogallala is entrusted with the arrangements.