Arterburn to serve as Sidney mayor 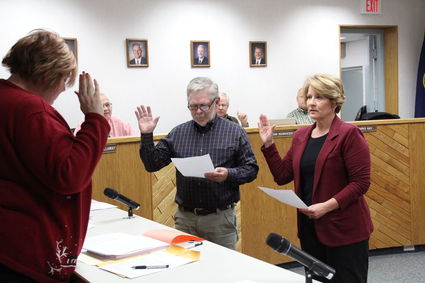 Sidney City Attorney J. Leef administers the oath of office to Joe Arterburn and Kelly Utley during this week's Sidney City Council meeting. Arterburn was re-elected in November, while Utley was appointed to council Tuesday evening. Arterburn was later chosen by council members to serve as council president.

In his last act as Sidney's Mayor, Mark Nienhueser nominated Kelly Utley to replace Councilman Chris Gay, whose term ended with the meeting. Gay chose earlier this year not to run for re-election, citing a desire to pursue other interests. Councilman Joe Arterburn was re-elected, but with two openings and only Arterburn on the ballot, council needed to fill the opening by appointment.

In making the nomination, Nienhueser said Utley rose to the top of four people who indicated interest in t...