Dry edible bean breeding greenhouse – it's a jungle in there 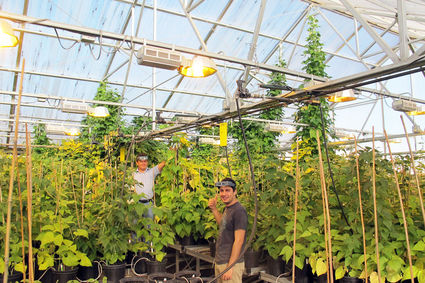 It looks like a jungle this spring in the greenhouse used by Dr. Carlos Urrea, dry edible bean breeding specialist at the UNL Panhandle Research and Extension Center, and his crew.

About 800 different dry bean varieties, planted in December in individual pots, are growing like crazy – far above the typical height in Panhandle bean fields. Some are 18 to 20 feet tall, vining their way up wood dowels, twine, and into the greenhouse ceiling structure.

The bean seeds come from the core collection of CIAT, the International Center for Tropical Agriculture. Urrea keeps seeds from each of the lines to use as germplasm in developing new dry bean varieties for the bean industry, and for various studies.

The 800 varieties in the Scottsbluff greenhouse represent about half of the 1,700 total varieties Urrea obtained from CIAT. CIAT has a total of 37,000 different common bean varieties from all over the world, representing a vast number of different market classes.

In this case Urrea and his technician Eduardo Valentin Cruzado are increasing the number of seeds so they can be used in a study being conducted by the newly established Nebraska Food for Health Center (NFHC), which emerged from the "Gut Function Initiative" in the UNL Department of Food Science and Technology.

The study will assess the effects of genetic diversity in common bean on the human gut microbiome, using an initial in vitro screen of the gut microbiome phenotype to define candidate bean lines that will ultimately be tested for health and wellness characteristics in animals and humans, according to the director of the NFHC, Dr. Andrew K. Benson, Food for Health Presidential Chair.

Benson said work is still at a very early stage in the project, and the NFHC only has pilot data from 10 lines tested across microbiomes from 24 human subjects. The 800 lines that Urrea and his crew are bulking up individually in the Scottsbluff greenhouse will be the first large-scale genetic analysis of these "Microbiome Active Components" (MAC traits) that has ever been done in dry beans, he said.

Benson said the Food for Health Center also is in the midst of doing similar testing across diversity panels of maize, sorghum, and soybeans (also the first time this has ever been done).

"Since we are pioneering this innovative approach to discover relationships between plant genetics (nutrient content), the microbiome, and health/wellness, we won't have any real results worth broadcasting until completion of the large-scale studies this coming fall."

The project fits into the mission of the NFHC, which was developed to not only promote discovery of MAC traits in plants, but also to translate these discoveries through validation in animal models and human clinical trials, according to Benson.