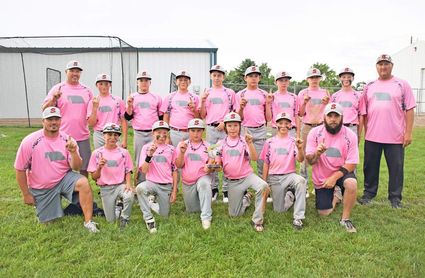 Sidney's 12U Cal Ripken baseball team won their division in the Sidney Wood Bat Tournament at Legion Park over the weekend.

Sidney's 13U team was the runner up in their division, falling to Brush, CO in the championship game.

After defeating the Westco/Scottsbluff team in the semi-finals 6-to-5, the Sidney boy's faced off against the Brush, CO team in the 12U championship game, and defeated the visitors 8-to-0 to earn the 12U Wood Bat Championship. In the 10U division, the Westco/Scottsbluff team defeated the Yuma, CO team 7-to-2 to take the 10U title. The 13U Sidney team was the runner up...