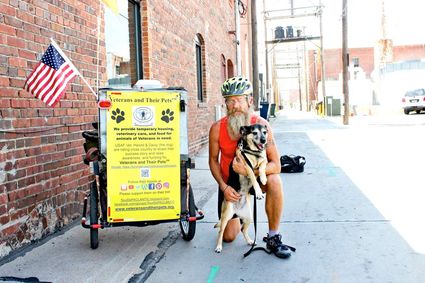 Harold Palmquist is pictured with his dog Daisy and his bike after lunch during his stop in Sidney.

He might look like a homeless man, and you'd be right, but he's not without riches of a certain definition, or a reason to get up in the morning.

Monday morning, a bicyclist approached Sidney with several water bottles, and a supply cart in tow with nearly anything a cyclist might need on a multi-state ride. Harold Palmquist and his dog Daisy on on a cross-country quest, an effort to promote a nonprofit program called Veterans and Their Pets, and to bring awareness of veterans' needs.

The trip has taken them from the Atlantic coast to Nebraska with a goal of Seattle, Wash.

"If I want to go day after day, 26 (miles) is the magic number," Palmquist said Monday.

He pulled into downtown Sidney from Lodgepole in time for lunch before heading north to Gurley or Dalton, depending on the energy needed to push his 480-lb bicycle, support wagon and dog up the hills and to an acceptable overnight stay. His goal is attainable since he doesn't have a timeline, other than to clear the mountain passes before winter arrives.

"I got in for the GI Bill, to serve my country," he said.

He said his GI Bill only paid for tuition, leaving him struggling for the cost of books. He left college and later opened his own landscaping business that allowed him to be a stay-at-home dad for a time. That was several years ago.

He worked driving a taxi for a time, making just enough to survive. Then life changed again. He got behind on his bills which then lead to homelessness.

He made the trek from Winslow, Ariz., to Los Angeles, Calif, to be with his sick dad.

"Three months later, I was holding his hand when he died," he said.

He was assisted by the program "Veterans and Their Pets." He left the shelter in Arizona with a bicycle, his dog Daisy and few personal belongings. After the funeral, he faced the decision of returning to a homeless shelter, or finding a purpose in life. He decided to bicycle across the nation promoting the Veterans and Their Pets program. While in L.A., he did some work for a lady and earned enough to buy a trailer for his bike.

"My mission is to spread the word to local shelters, rescues and veterans organizations along the way of the issues facing veterans with their pets. Many veterans stay in harm's way, fail to seek medical assistance and remain homeless because of the lack of support for their pet while they seek assistance," he says on his GoFundMe sight.

He says the US government's goal of no homeless veterans is commendable but doesn't address how a veteran will receive service when the system doesn't have a support system for the pet.

Palmquist has a PayPal account for people who want to support him as he finishes his ride west. He says townspeople frequently support him as well, offering dinner, or a place to stay for the night. He quickly admits he is more comfortable with his bedroll and a tent than accepting the gratitude of a hotel room. But at the same time, he sees himself as blessed with the support and social connections that occur through the many people he's met on the ride.

"For the most part, I've been able to give back to the community at the lowest part of my life," he says.

He tells of riding about 1,500 miles on one set of bike tires, of the segment where he broke several spokes in a day, ending that day's ride with one spare spoke left. There was the time in Arizona when he had 10 flats in a day. There were also times people overwhelmed him with support and kindness; the company who donated a bike, the man who paid for most of a set of tires and the numerous people who randomly left a small amount of support on his rig.

"I meet some amazing folks," he said.

Now in approximately the second half of his second trip, he has logged about 11,000 miles bicycling across the U.S. It is an experience that probably doesn't fit many. The endless miles alone except for his dog Daisy, the challenge of finding a place to camp or stay each night and learning to be a roadside mechanic each add up to what could push many people to hanging up the helmet and calling for a ride home. He's not like everyone else.

"I'm comfortable on my own," he says. "I've got such an extreme, varied background I can related to most anyone."

His trek north and west will include the sites on the way out of Cheyenne County, Bridgeport and Alliance where he wants to see Car Henge.