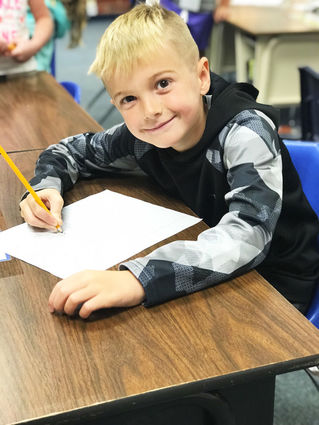 It started as a classroom assignment, but netted him attention in many directions, including a near viral level of attention on sports websites.The elementary writer of sports and to sports leaders was written about by a professional sports writer.

Liam Ford is an active eight-year-old with defined passions; most of them have to do with football, more specifically Nebraska Husker football.

"I watch football a lot," he says.

Not only does he watch football a lot, he has an impressive understanding of the sport, including who is leading in what position and what division.

"When I was two years old, I started going to the Spring Games," he said. "Now, I'm eight."

His favorite part of the game is the last minute touchdowns, and watching Adrian Martinez play.

He is also a bit of an historian. He knows the name of the University of Nebraska football team before they were called the Huskers: the "Bug Eaters."

His recent claim to fame, however, started as a classroom assignment. As a second grader in Kaela Cole's class at South Elementary, he does a lot in his other passion: writing. Cole and Liam have a common interest: Husker football. She says he frequently enters the classroom exchanging comments with her about the recent Husker games; how they did, why a given player missed a tackle or ran the pattern he did. His passion carries over to his book bag shaped like part of a Nebraska helmet, and his favorite football.

Recently, the class was assigned to write a letter. That is where his two passions intertwined.

"After they wrote one in class, they could write to anyone they wanted," Cole said.

He finished his class assignment and combined the three in an unexpected fashion. He wrote his post-assignment letter to Husker football head coach Scott Frost, a bold move that is catching attention in many places.

He isn't timid. He addresses Nebraska's team as if they are peers.

Scott we need to add Alabama to are season because we need to test. You and Stanley Morgan Jr. needs to work on his footwork and Ziggy Stardust too."

Cole's letter, written just after the Nebraska-Colorado game, hit Facebook in hours, and has since been shared across the country, including top sports shows.

He has written three letters to Frost, one to retired Husker coach Tom Osborn that is still a work in progress and wants to write other notable football players and coaches.

He admits writing is one of his favorite subjects, followed by math and technology. When he grows up, he wants to play for the Huskers, maybe go on to the NFL after that.