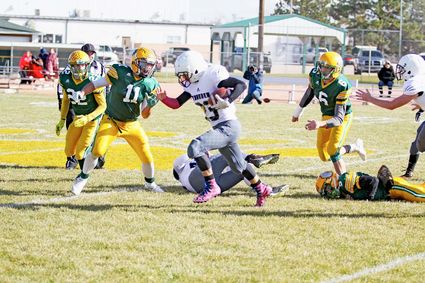 Peetz senior Bryce Long and junior Cooper White shut down the Flagler/Hi Plains running attack during their 64-7 victory in Peetz on Saturday.

Although entering the playoffs from the middle of the pack, Peetz showed it is still a team to be reckoned with, rolling over Flagler/Hi Plains 64-7 in the opening round of the Colorado Six-Man Playoffs Saturday.

As it has all year, Peetz used the one-two punch of a powerful running game and a smothering defense to muffle the Thunder's attempts to make some noise.

Peetz was on the receiving end of the opening kickoff and took just five plays to take the lead, on a 30-yard run by junior Cooper White.

Flagler/Hi Plains went three-and-out on its first possession, then met an unexpected foe in...