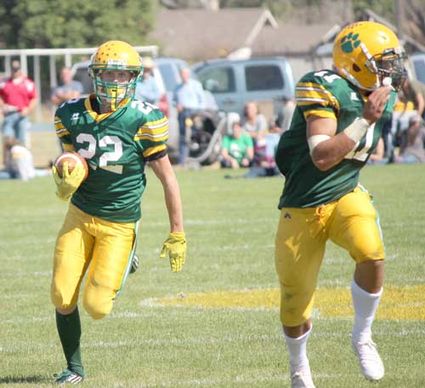 Peetz junior Cooper White gains big yards as senior Bryson Long leads the way during recent action. The Bulldogs take on Stratton/Liberty in a playoff matchup on Saturday in Peetz.

Peetz's Bulldogs had a score to settle with the Otis Bulldogs, as Peetz lost to Otis in the season opener back in August. The Bulldogs came away with a thrilling 84-to-78 victory on Saturday.

For the second round of the CSHAA State Football playoffs, the number five seeded Peetz team traveled to the number four seeded Otis team's home field for a battle that took until the final moments of the game to decide.

The two high-powered offenses traded scores to open the game, with both teams able to move the ball against the opposing defenses, and the first quarter ended with Otis ahead 16-to-14...