No One Injured In Apartment Fire 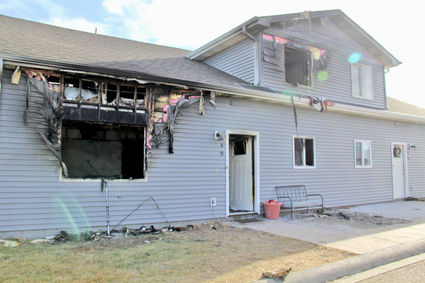 Sidney Volunteer Fire Department responded to a structure fire at 2440 Ft. Sidney Rd. in the early morning hours Tuesday. The fire, in a duplex apartment, burned through the walls in the front and back, while gutting the interior. The families that lived in the adjoining apartments escaped injury. The cause has yet to be released by the State Fire Marshal's Office.

Sidney Volunteer Fire Department was called to the scene at Fort Sidney Apartments, just off of Fort Sidney Road, at around 2:30 a.m. The initial report was that someone was trapped inside one of the apartments, but fortunately all occupants had escaped from the building by the time responders arrived.

Firefighters knocked the blaze down, but not before it gutted the interior of the main apartment involved. Sidney Fire Chief LaVerne Bown reported the adjoining apartment ha...