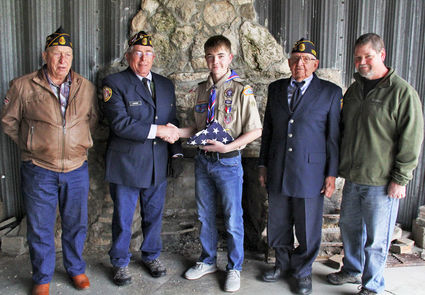 A Sidney teen has been recognized for earning the highest achievement in the Boy Scouts. At just 15 years old, Owen Kurz joins a group of high performing Boy Scouts from the area who have successfully met the requirements of Eagle Scout.

Kurz was recognized for the award just before Christmas in a ceremony held by Legion Post 17, which sponsors Sidney's Troop 90. In receiving the award, Kurz joins the top five percent of scouts.

The award was presented at Camp Hubert Fuller west of Sidney. The camp has long been set aside for youth and their activities. The site was significant as Kurz performed extensive work at the camp as his Eagle Project - owned by the Ciity of Sidney. Kurz made a number of improvements to the site, among them building benches and a fire ring, repainting the camp's sign, and re-doing the on-site outhouse. To qualify for Eagle, scouts must earn at least 21 merit badges, awarded for learning skills taught in scouting. They range from physical skills, like knot tying, to learning and practicing citizenship.

Presenting an American flag to the young scout was Legion Post 17 Commander Les Larson. In making the presentation, Larson read part of a letter penned by a veteran. It read:

"Our flag is known as the stars and stripes. The union consists of white stars on a blue field, symbolic of a new constellation. Each star represents one individual state and together they stand indivisible. the Stripes represent the original 13 colonies that declared their independence from Great Britian in 1776.

"Though unofficial, Red is symbolic for the blood of those who have given their lives to defend and protect the great nation from all of her enemies, both foreign and domestic. White represents purity, innocence and hope. Blue is for vigilance, perseverance, and justice.

"But in out hearts the flag stands for many things, evident in the Declaration of Independence where all men are created equal with rights to life, liberty and the pursuit of happiness. The right of the people to abolish any form of government becomes destructive. Our flag stands for the Constitution of the United States of America. Freedom of religion, freedom of the press, freedom of speech. It provides for security to all of her citizens; it also provides for a fair and swift trial. It abolished slavery, and it gives each and every individual of age the right to participate in our voting process. To have a say in his or her future. Our flag is a beacon, recognized around the world to represent freedom during times of peace during times of war."

In addition to Larson, the ceremony was witnessed by Legion members Al Jung, Dale Dickinson, and Brian Kurz, Scoutmaster for Troop 90 and Owen's father. Also attending were long-time scouting supporter Bob Pohl and his wife Judi.