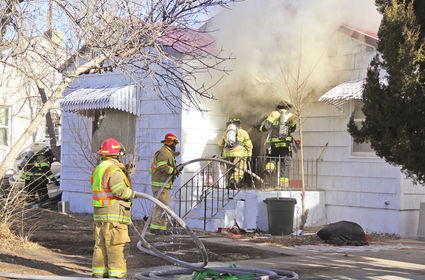 Sidney Volunteer Firefighters enter a house in the 2100 block of 22nd Ave. after responding to a report of smoke coming out of the back of the house. Firefighters extinguished the fire after about 20 minutes.

Sidney's Volunteer Fire Department responded to a house fire late Friday morning in the 2100 block of 22nd Ave. in Sidney.

Black smoke poured from the back of the home when responders arrived to the scene. At one point, fire spewed out of a window near the back of the home during the fire department's attack on the fire. It took firefighters about 20 minutes to bring the blaze under control as neighbors watched.

The home was unoccupied at the time of the fire, and no one was injured. Kristopher Gadway, head of the household of five, was at work near Kimball, while other family members were...