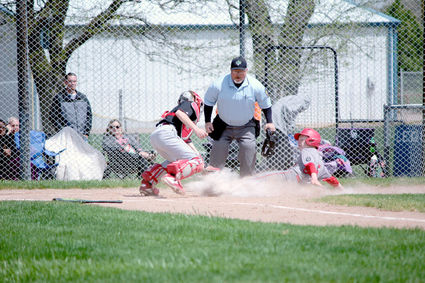 Sidney's Izak Doty is tagged out at home trying to score during the first game against Fort Morgan on Sunday.

Sidney's American Legion Post 17 Junior Baseball Team opened their home schedule on Sunday with a double header against Fort Morgan, Colo., and came out on the wrong side of the score in both games at the end of play.

There was plenty of sunshine, but a cool breeze brought the blankets out for many in attendance, and after the Post 17 Color Guard honored America during the national anthem, Sidney's Ty Stettner took the mound for the first game.

Sidney then got their offense going with leadoff hitter Isak Doty hitting a fly ball that dropped into shallow centerfield for a single, and then was moved to second base by a sacrifice bunt by Conner Glanz. After Doty stole third, Jakob Meyer laid down a bunt for a single, but Doty was tagged out at home trying to score. Luke Holly then struck out to end the inning for Sidney.

Both teams were able to get baserunners and scatter a few hits, but no runs crossed the plate until the top of the third inning when Fort Morgan had runners on first and second, and a ground ball hit between third base and shortstop was deflected by third baseman Jakob Meyer and traveled into the outfield, allowing the runner on second to score. A wild throw to third base put runners on second and third with one out. The next batter drove a single to the outfield, scoring the runner from third, but the runner from second was too aggressive and was tagged out trying to score at home for the second out. After the runner on first advanced to second on a wild pitch, Fort Morgan drove a single to centerfield to score the runner, increasing their to 3-to-0. Stettner ended the inning by striking out the next batter.

Conner Glanz put down a bunt and beat the throw for a single, and Doty caught the first baseman off-guard and scored from second base, beating out the late throw from first to chip away at the Fort Morgan lead, 3-to-1.

Stettner was replaced in the top of the sixth with Kyle Shaw, and Fort Morgan took advantage of the new pitcher's wildness, drawing walks and picking up singles to put pressure on the Sidney defense. After more walks, a few hits, and a few throwing errors by Sidney, the Fort Morgan team ended the inning with a 10-to-1 lead.

Sidney got one last chance in the bottom of the inning, but a leadoff double by Micah Schneider was wasted by the next batters striking out, flying out, then striking out again to end the game in a Sidney loss.

In game two, Micah Schneider took the mound and walked the leadoff batter to start the game. Sidney's defense was suspect in the first inning, with a pop up dropped at second base, and another pop up that dropped into center field. But Schneider kept focused and was able to retire the final two batters to escape the inning with only one run scoring.

Sidney then got their offense going with a single by Luke Holly, who then quickly stole second and third base. After Blaine Russell drew a walk to put runners on first and third, Schneider delivered an RBI base hit to knot the score at 1-to-1. Colby Langley hit a come backer to the pitcher, but the throw was off line and pulled the first baseman off the bag, making Langley safe at first and scoring a run to give Sidney a 2-to-1 lead at the end of the first inning.

A third passed ball brought the runner in to tie the game, and advanced the trailing runner, who had walked, to third base. He then scored on a pop fly that was dropped by the right fielder, and Fort Morgan took a 5-to-4 lead.

Sidney struck back in the bottom of the fifth when Micah Schneider singled to lead off then Dietrich Lecher blasted a triple over the head of a shallow playing centerfielder, scoring Schneider and tying the game 5-to-5. Jakob Meyer then drilled a line drive that was caught by the shortstop, who then threw to third and doubled up Lecher. With two outs, Colby Langley was able to get on base with a single, but Landon Hanes then struck out to end the inning.

Meyer gave up a hit in the top of the sixth, but was able to get out of the inning without any further damage to keep the score tied 5-to-5. In the bottom of the sixth with one out, Conner Glanz was able to reach first with a single, but Luke Holly attempted a bunt that was popped up and caught by the catcher who then threw to first to double up Glanz and keep the score knotted at five.

In the top of the seventh, a leadoff base hit followed by a pop out to the shortstop then followed by another base hit gave Fort Morgan runners on first and third with one out. Sidney's defense faltered when a pop fly to right feild dropped in, scoring the runner from third to break the tie, and Fort Morgan led 6-to-5. After a strikeout for the second out, Sidney looked like it would escape the inning giving up only one run, but a grounder to second base was misplayed by Kyle Shaw, and two runs scored for the visitors. Another walk and a steal put runners on first and third, and a passed ball scored another Fort Morgan run.

After a pitching change was made bringing in reliever Luke Holly, another passed ball brough in another Fort Morgan run. Third baseman Jakob Meyer made a spectacular diving catch near the Fort Morgan dugout in foul territory to finally end the inning, but the damage was done and Sidney fell behind 10-to-5. Sidney went down in order in the bottom of the seventh to end the game with a 10-to-5 loss.

Wednesday marks the Senior team's home opener at Legion Field, where the Sidney seniors are scheduled to host Bridgeport at 7 pm.