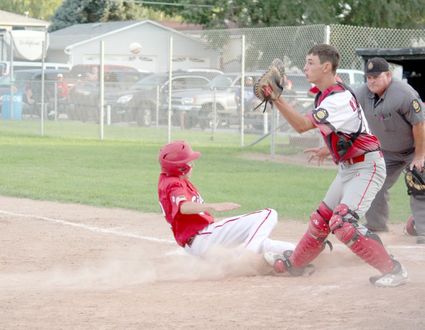 Sidney's Jacob Dowse is safe at home during the Junior 1 team's loss to Chadron on Saturday.

Sidney's American Legion Post 17 Junior squads competed in the area District Tournament hosted by Sidney over the weekend, and both the Junior 1 and Junior 2 teams fell short against the area competition in the double elimination tournament.

The Junior 2 squad led off the tournament against the No. 1 seeded Alliance Spartans on Friday, with the Sidney squad designated as the visiting team. The Spartan's Nolan Nagaki made short work of the Sidney lineup in the first inning, setting the Juniors down in order while the Alliance bats started out hot in the bottom of the first inning.