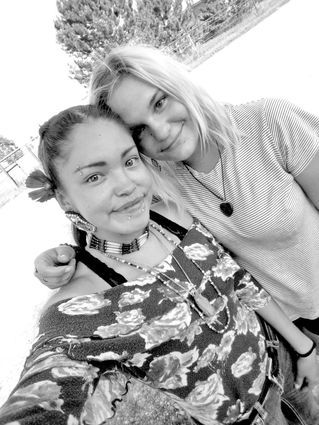 On Friday afternoon, commuters on Highway 30 between Potter and Sidney had an extra "personality" on the pavement. It was a scene that could almost be timeless with two horseback riders cutting through the grasses in the afternoon head. If not for the passing motorized traffic, including two pickup trucks and horse trailers, the scene could have been from more than a century in the past.

The team of riders are a blend of Native and Non-Native. Some are curious and adventurous. Others are aware of conditions at Pine Ridge and do the ride to to stay connected with friends. Friendships are also built during the ride.

"I like it because there's no color," said Pansy Two Wolves Weasel Bear.

She said while on the Tipi Raisers rides, heritage or skin color are of little consequence. What matters is respect of each other and being part of the team. She said people on the trip don't focus on the differences but develop common ground.

Saturday, during a break from time on the road, she talked about the Lakota people and the challenges they still face while living on the Reservation. She said as recent as at a meeting before the ride, groups separated themselves by race, leaving her to ask why. She said sometimes a group of Natives are confronted by security at a mall or store, but the same size group of non-natives would not be viewed by security. That is one of the reasons she goes on the rides, to help bridge the relationship between Natives and Non-Natives.

"To me, it is like unity, Native and Non-Native," she said.

She said the feeling of community also develops with communities they stop in along the journey.

The Tipi Raisers spent the weekend at the Lodgepole Creek Saddle Club, also offered the amenities of the Best Western hotel Saturday before getting back on the road Sunday morning.

Two Wolves Weasel Bear said some of the problems on the Reservation are related to people who have lost their way.

"I think it is all about finding yourself," she said.

She said the Sioux and Lakota way of life is much different than non-native. She said she learned from her family that when returning home, leaving work and negative influences at the gate. She added that if her people would stay away from alcohol and drugs, they wouldn't have the problems they do. She attributes much of the conflict to videos, music and games, as well as a lack of family values. She talked of her own history. She and her husband had a ranch, kept a budget, had a good family, but still she and her husband drink to the point their daughters confronted them, asking them to quit.

"We caused pain," she said. "People made it look fun, but you're blind to what it does."

"When you're under the influence of alcohol, you have no respect," she said.

With all of the challenges, she is still proud of her heritage. She said there is always hope.

"I would never want to be any other race," she said.

Conditions at Pine Ridge some might call a Third World state with 85 percent unemployment, homes without electricity or running water and families having to walk several miles to the nearest grocery store. The "lucky ones" receive General Assistance from the tribe, but that only amounts to about $5,000 per year. Homes are often dilapidated and in urgent need or repair. In some instances, there are two or three generations in one small house because it is the best option available.

The difficulty is compounded with a four-season environment. When the electricity goes out, the family has to find a way to stay warm through the winter cold.

She said even with the trials, "there's still so much good." She said there are a lot of students going to college.

One of the Non-Natives on the trip, Skyla "Sky" Gabriel, of Colorado Springs, Colo., said she connected with the Tipi Raisers with the encouragement of an English Teacher who talked about going to Pine Ridge. On her first trip – 2019 is her second ride – she saw a sign as the group entered Pine Ridge that defined the generational hurt: "Death to the White Man." The Sioux word for white man or non-Indian according to http://www.native-languages.org, is washichu, or "fat-stealer."

She recalls working on a home of a family of five – two parents and three children – that had no electricity or running water and stove heat.

"On occasion, they burned their own clothes," she said. "That level of poverty struck me so hard."

She said even with the poverty level, the people are very positive. She recalled meeting a young girl who was very shy the first time they met. As time went only, they became friends, with the girl looking forward to Sky's returning.

"The more I came to Pine Ridge, the more my desire to be part of change grew," she said.

She said the ride is only part of what Tipi Raisers do. There are trips to Pine Ridge as missions to help the residents with home repair projects or any other needed work.

"Anything they need, that's what we're here to do," she said.

She is also involved in Gen7 Youth group. Gen7 is designed to "create an authentic community and social change through multiple annual gathers" for Native and non-Native youth.

The Tipi Raisers left Sidney Sunday destined for Bridgeport. They were scheduled to leave Bridgeport Monday for Lisco, and from Lisco to Sandhills 1 and then Sandhills 2, and expected to arrive at Pine Ridge on Saturday, Aug. 3.