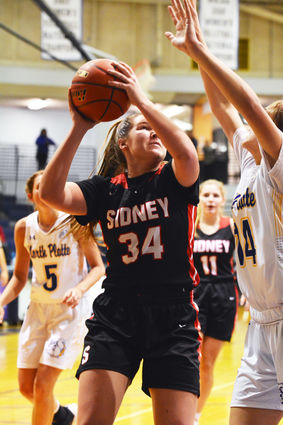 Sidney senior Karly Sylvester battles under the hoop during the Lady Raiders 43-39 loss to North Platte at the Western Conference Tournament in Gering over the weekend.

The Sidney Lady Raider basketball team opened their season over the weekend at the Western Conference Tournament in Gering, and the team won one and lost two while they search for a winning formula early in the 2019-20 campaign. Head coach Tyler Shaw said prior to the tournament that he wanted to focus on defense, and let the shooting come along as the season progressed

On Thursday, the Lady Raiders started the action with a blowout victory against a Mitchell Lady Tigers squad that had lost most of its starters to graduation. With no height to block the inside and inexperienced players try...