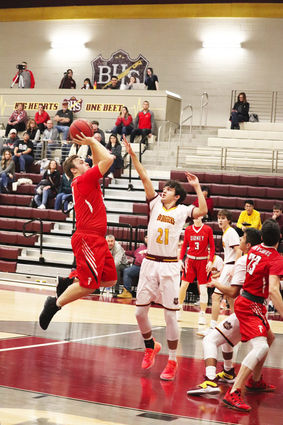 Sidney senior Nathan Wamsley puts up a jump shot during the Red Raiders' 54-53 victory over Brush on Saturday.

Sidney's Red Raider Basketball team hosted the 7-and-8 Chadron Cardinals on Friday and neither team could put points on the board to start the game.

After three full minutes of missed shots and turnovers, Chadron finally connected with a three point shot, but Sidney responded by going a run to tie and then open a lead. Chadron battled back at the end of the period, but Sidney senior Skylar Hieneman's jumper at the buzzer put the Raiders ahead 12-to-9. The second quarter continued the defensive struggle, but Chadron started to get an offensive rhythm going and pulled past Sidney. Sidney kep...