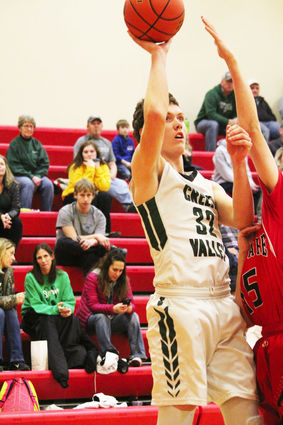 Creek Valley junior Oakley Hodges puts up two points during the Storm's 44-33 victory over Minatare in the first round of the D1-12 Subdistrict Tournament on Monday.

Creek Valley's Storm Basketball team defeated the Minatare Indians Monday at Sidney High School in the first round of the D1-12 Subdistrict Tournament by a final score of 44-to-33.

The game started with Creek Valley junior Oakley Hodges draining a three pointer, only to have Minatare junior Dario Rodriguez respond with a three point hit of his own. Both teams used defensive pressure to force turnovers and bad shots, and then teams battled to a 10-to-9 Creek Valley edge at the end of the first. But the Storm started to take over the game as the second quarter progressed, with Creek Valley j...