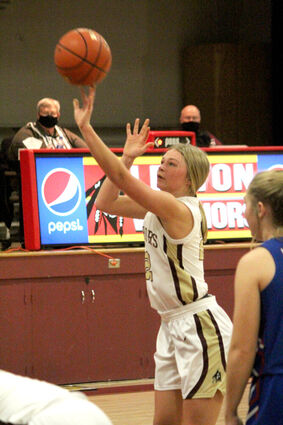 Leyton’s basketball teams hosted Arthur County last Tuesday in their final action before the Christmas break, and the teams split with the girls losing and the boys winning their contest.

The Lady Warriors increased their roster to six players with the addition of senior Sage Rummel, but the Lady Wolves had a much deeper roster with 15 players and a size advantage that proved too much for the Leyton squad.

Even with that disadvantage, the Leyton girls played tough and hung on through the early going, hitting outside shots while being shut down under the boards.

Arthur County scored four quick points at the end of the first quarter to give them a 16-to-9 edge going into the second quarter.

Arthur County subbed early and often, keeping their players fresh while the Leyton team wore down. The Lady Wolves were able to put up 18 points in the second quarter with their tough inside game, and the Lady Warriors trailed 34-to-16 at the half.

Arthur County poured it on in the third quarter, and pulled away with a big lead that started the running clock, then coasted through the fourth quarter with their bench players to earn the 67-to-26 victory. But the Leyton girls battled hard the whole way, never giving up and challenging every Arthur County shot.

Although the score was lopsided, the effort was tremendous, and the exhausted Lady Warriors left the court to the appreciative cheers of the crowd. Freshman Claire Watchorn is starting to make an impact for the Lady Warriors, and she led the Leyton scoring with 12 points. Seniors Ella Draper and Sage Rummel had eight and five points respectively in the loss.

It was a different story for the boys team, as the Warriors have a solid roster packed with talent. With good size and great speed, the Warriors are starting to play well together, and matched the Wolves’ scoring in the early going.

Led by slashing drives to the hoop by junior K.J. Bush, Leyton then went on a 10-to-0 run and kept the Wolves at bay, leading 20-to-10 at the end of the first quarter.

Arthur County chipped away at the lead in the second quarter, but a scoring burst capped by junior Scout Gamble’s buzzer-beating three-pointer gave the Warriors a 33-to-22 lead at the intermission.

The physical inside play between the teams continued, and Arthur County’s leading players started to rack up fouls as they closed the gap with the Warriors. With the lead trimmed down to four points, Leyton again battled back, and built the lead back to 12 points. 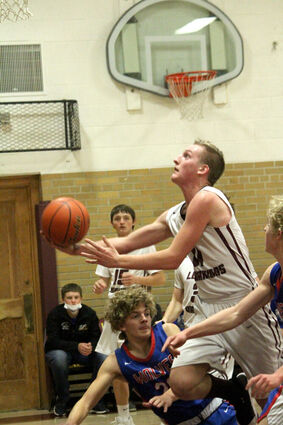 Arthur County junior Bryce Hanna nailed a three pointer at the buzzer to trim the Leyton lead to 50-to-41 going into the final quarter.

Leyton was able to keep pace with their scoring, while the Wolves’ top scorers, Hanna and senior Alex Worthing, fouled out later in the quarter. Leyton was able to then cruise to a 68-to-54 victory. Bush led the scoring for Leyton with 19 points while senior Zack Henke had 10 points, including eight points in the critical third quarter, before he fouled out later in the fourth quarter.

The Leyton girls team fell to 1-and-3 on the season with their loss while the boys improved to 2-and-1 and look very sharp going into the break.

Leyton’s next scheduled games are on January 9 when the travel to Hay Springs to face off against the Hawks.