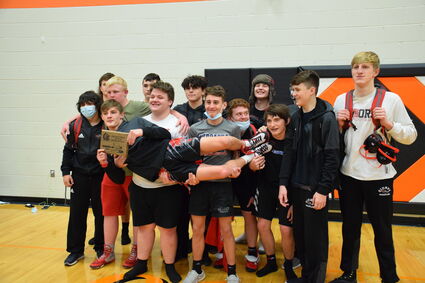 Sidney’s Red Raider Wrestling team continued their winning ways in Ogallala over the weekend, going undefeated in dual competition and earning a spot in the Championship against Ogallala. However, after beating Ogallala earlier in the season at the Charlie Lake Duals in Wyoming, the Indians were able to get the better of the Raiders, earning the 51-to-21 victory in the championship match up.

Sidney’s Chance Houser and Austin Munier both went 5-and-0 in the competition, while Brandon Lock finished 4-and-0 for the day. Sidney started the day with a 48-to-24 victory over Chadron, followed by a 46-to-27 win over Mullen. Sidney then made quick work of Alliance with a 45-to-22 win, but had a much closer contest in the fourth round against Gothenburg, pulling out a 42-to-36 win to send them to the championship round.

Sidney finished second overall in the competition to Ogallala. Bridgeport won their consolation round match up against Alliance for a third place finish. Sidney next faces Bridgeport for a dual meet on Thursday, then they travel to Gothenburg for a Dual Tournament, facing off against Chadron, Gering, Gothenburg and Waverly starting at 10 a.m. (Central Time) on Saturday.

Leyton’s Warrior Wrestling team traveled to Oshkosh to compete at the Garden county Invitational on Saturday, and finished ninth out of twenty teams for the day with an overall score of 54.5 points. Bayard earned top honors with 142 points, followed by North Platte with 127 and Mitchell with 113. Brenton Abbott took home a third place finish for the Warriors at 126 pounds.