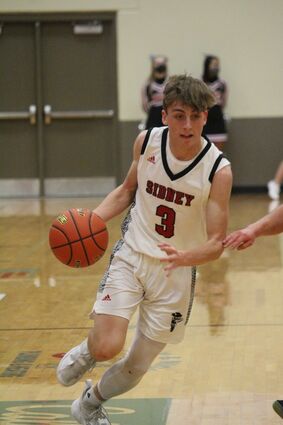 Sidney’s Red Raider Basketball team stumbled on the road against Gering Friday night, but recovered and earned a big home win against McCook Saturday afternoon to move their season record to 7-and-5.

The Raiders traveled up to Gering Friday to take on the Bulldogs with one win against their rivals in an early season contest. Sidney started hot against the Bulldogs with three pointers hit by junior Sawyer Dickman, sophomore Micah Schneider and junior Wyatt Hickenlively, but Gering fought back to narrow the Sidney lead to just 13-to-11 at the end of the first period. Gering turned the tables on Sidney with hot shooting performances by their starters, passing by the Raiders and building a 27-to-20 halftime lead.

Dickman led a comeback in the third period with 10 points in the frame to tie the game at 33-to-33 going into the fourth quarter, but Gering opened the final frame with five quick points, and never trailed as they cruised to a 58-to-49 win, the same score Sidney defeated the Bulldogs by in their first meeting. Dickman had a great offensive night, leading Sidney with 24 points while Gering had three players score in double-digits in the Sidney loss.

The Raiders regrouped and reloaded the next day with a home contest against the McCook Bison, and Sidney started fast with a Hickenlively three-point hit to start the game. McCook fought back, and a well-played but low scoring first period ended with the Raiders up 10-to-9. Sidney passed the ball well on the inside to get good looks, but also ran into foul trouble with Dickman picking up three calls in the first period.

Sidney opened the second quarter with a three-point hit by Schneider, and started to pull away from the Bison.

The defense played very well, disrupting the McCook offense and passing game, while stealing the ball away with regularity through the quarter. Sidney opened a 10 point lead led by senior Zack Burke’s 11 points in the quarter, and led 31-to-31 at the half.

Sidney cruised through the second half, again keeping up the defensive pressure, and only a lapse during the fourth quarter allowed McCook to narrow the lead. But it was too late, and the Sidney defense was too strong, and the Raiders held on for an eight point victory, 58-to-50. Zack Burke led the Sidney scoring with 19 points in the win.

The Raiders were scheduled to travel to Mitchell to take on the Tigers on Tuesday.