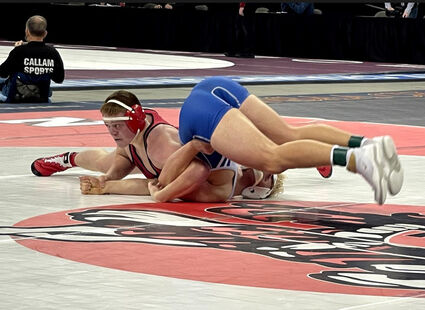 After being dropped to the consolation rounds on Friday, freshman Chance Houser battled back with four victories to earn a third place medal in the 106 pound weight class, ending his first year with 44-and-3 record. Head Coach Beau McConnell said, “Chance showed a lot of grit wrestling all the way back and earning 3rd in a very competitive bracket to finish off a solid freshman season.”

Junior Austin Munier advanced to the semi-finals, but lost both of his matches Saturday morning, first to Omaha Skutt’s Zachary Ourada, then to Columbus Lakeview’s Andon Stenger. He was able to recover and pin Bennington’s Connor Ritonya to earn a fifth place medal at 120 pounds. McConnell noted, “Austin wrestled back in what was one of the tougher brackets in the tournament and earned a 5th place medal to cap off a great junior season.” 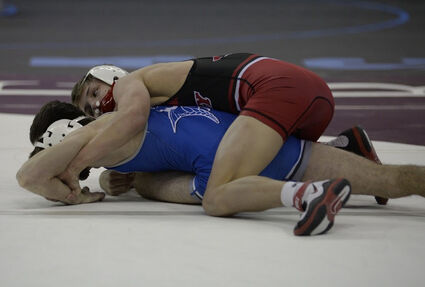 Senior Brady Robb also advanced to the semi-finals, but lost to Beatrice’s Deegan Nelson. He advanced to the third place match by pinning Cozad’s Kaleb Pohl in the consolation semifinals, but then lost to Bennington’s Luke MacDonald in the semifinals to earn a fourth place medal at 182 pounds. McConnell said of the senior, “He lost a close one to a Bennington wrestler who would end up being the state champ at that weight. Brady wrestled back fighting through some injuries to earn himself a 4th place medal and end his career at Sidney with over 150 wins and a 2 time state medalist.”

Senior Hunter Ahrendt wrestled well on Friday, but came up short in his matches and did not earn a medal at 195 pounds. Sidney Head Coach Beau McConnell was pleased with his wrestlers performances, saying, “The atmosphere was definitely different with only having one class competing at a time (because of COVID-19 restrictions) and the tournament ran faster than usual but our guys responded well to that and had solid outs on both days. Overall the guys wrestled well with a lot of heart throughout the weekend and we as coaches are proud of not only our state qualifiers and medalists but our entire team and how they competed and remained flexible and adaptive in a year like this one.”