Changing of the Guard 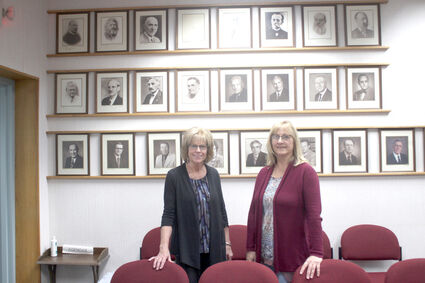 In 1980, Cindy Heilbrun developed a working relationship with the City of Sidney. Nearly 38 years of experience and 41 years of history later, she turning over her office keys to another.

She started her career in public service as secretary to the city manager. After taking a leave of absence, she came back at the urging of Geri Anthony to serve as cashier. She was then promoted to deputy clerk. The position of Deputy City Clerk was designed under Anthony. At about the same time, the office of city clerk absorbed duties from other desks. Heilbrun said she used to do much of the human resources duties until Jodene Houser was appointed to the HR desk.

On Friday, June 4, Heilbrun completed her time with the City of Sidney. She said when she told City Manager David Scott her plans to retire, he asked for six months to train the new city clerk. The six months end Friday and her duties have been passed on to other staff. She said Scott encouraged her to train to the point she had nothing to do. Tuesday, June 1, her desk was polished clean compared to the busy-ness of a person doing the work of four or five people. She admits it frustrated her in a way.

The historic duties of the city clerk have been divided among five desks, she said. The division is based on skill set and who wanted to do what, she said.

“They're all doing really well,” she said.

Heilbrun has been part of the Sidney community since1978. She was born in Scottsbluff, then moved to Potter where she grew up.

In her time with the City of Sidney, she has worked with 13 mayors and eight city managers, in addition to serving as secretary to the Planning Commission. She said it has been interesting watching change in the city. The change includes technology and record-keeping. She started her experience before computers were commonplace in offices. It was a time of large, heavy typewriters and hand-written journals. She has never backed away from changes in office procedures.

Some of her fond memories of working for the City include the friendship that developed with Anthony.

“Geri and I worked together for 30 years,” she said. “She was my boss, and best friend.”

Her plans from here include “much needed rest,” gardening and family.

She also plans to see her grandchildren, including one who lives in Lincoln who she hasn't seen since COVID-19.

The City Council approved Lori Borchert as the next city clerk. Borchert has been in training since January. She recorded her first “solo” council meeting May 25.

She brings with her a little more than three decades of experience with the City, 31 years as of May 17.

“I look back on it, it doesn't seem possible,” Borchert said recently.