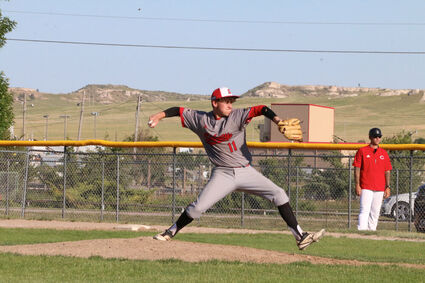 Sidney’s American Legion Post 17 Junior team traveled last Tuesday, June 22, up to Chadron, and Micah Schneider pitched a gem of a game until he reached his pitch count limit of 105 and had to be taken out.

Sidney started the top of the first with a run scoring single by Blaine Russell to take an early lead. Chadron was able to tie the game when a batter walked, and eventually came around to score on a wild pitch.

Schneider then cruised through the next six innings without giving up a run, while the Sidney bats plated three runs in the top of the second inning and two more runs in the top of the fourth to open a 6-to-1 lead. Reid Fiscus came in to pitch in the bottom of the seventh with two outs, and Chadron was able to put together a late rally, stringing together a walk and four singles to bring the score to 6-to-4.

However, Chadron got too aggressive on the basepaths and had a runner thrown out at home trying to score, ending the game in a Sidney victory.

Schneider was the star of the game, throwing a total of 107 pitches over 6.2 innings, striking out 10 batters and allowing one unearned run. Gunnar Dorcey had two RBI’s and scored two runs in the Sidney victory.

The Juniors next faced the Alliance Spartan junior team on Wednesday, June 23, and got off to a slow start, falling behind 2-to-0 at the end of the second inning. In the first inning, Jakob Meyer lined a double and Schneider drove a single to centerfield, but neither batter came around to score. Alliance scored a run in their half of the inning on a sacrifice fly to centerfield.

Again Sidney got two runners aboard in the second inning, but were unable to bring them home. Alliance scored their second run in their half of the inning on a sacrifice fly to right field. In the third inning, Meyer again got on board on a single to the outfield, and moved to third on a wild pitch and a single by Landon Riddle. Meyer then scored on an error by the left fielder on a fly out to narrow the Alliance lead to 2-to-1.

Sidney pitcher Conner Hurt was able to retire the side in order in the bottom of the third inning, but Sidney was unable to capitalize in their half of the frame, getting baserunners aboard via two singles and a hit batter, but no runs to show for their effort.

Alliance then plated two more runs in the bottom of the fourth inning, on an RBI single then a fielder’s choice to increase the Alliance lead to 4-to-1. The Sidney offense could not muster any more scoring through the rest of the game, and Alliance added one more run in the bottom of the fifth inning to take the 5-to-1 victory. Meyer and Schneider each had three hits in the loss, while Hurt went four innings and gave up four earned runs.