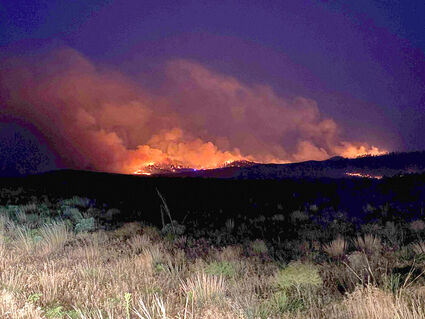 Aug. 10 — The Nebraska Emergency Management Agency worked with multiple state agencies to provide support to local incident command on the Hackberry Wildfire which started due to lightning 20 miles east of Harrisburg in Banner County, Aug. 5. As of Monday afternoon incident command and local fire officials report the estimated 6,000- acre fire as 95 percent contained.

Gov. Pete Ricketts declared a state of emergency for the fire, once local authorities had tapped into all their available resources, which allowed state resources to be directed toward the fire.

“The wildfire response has truly been a team effort from local firefighters, mutual aid firefighters, incident command, and volunteers,” said Gov. Ricketts. “The response has drawn on assets from here in Nebraska as well as from the neighboring states of Colorado, South Dakota, and Wyoming. Partnerships like these provide the leadership and resources needed to keep Nebraskans safe.”

“Type 3 IMTs pull such resources as personnel equipment and funding from the state level while Type 4 teams do the same locally, Tuma said. “Type 1 and 2 teams include agencies and resources from the federal level. “The deployment of the Type III IMT to effectively address this wildfire event further demonstrates the enhanced capacity of Nebraska to manage wildfire suppression activities with reduced reliance on federal assets. This is critical during times when a majority of the federal assets are deployed to major wildfire events on the west coast, Rocky Mountain states, and the upper northern plains states who are experiencing several years of significant drought.”

Nebraska’s single engine airtanker (SEAT) and two additional SEATs from South Dakota aided in the suppression efforts by making retardant drops over the fire, Tuma said. A large airtanker from Colorado also assisted. In addition, a Multi-Mission Aircraft outfitted with infrared and color sensors from Colorado was on scene to monitor the fire since smoky conditions made it difficult to determine where suppression efforts were needed for ground crews and other aircraft.

The Nebraska National Guard sent 12 soldiers and three helicopters. The crews flew 141 flights and dropped 141,405 gallons of water on the fire. Firefighters are monitoring hotspots and aircraft is on standby should additional support be needed. The Wildland Incident Response and Assistance Team (WIRAT), which includes members from the State Fire Marshal’s Office and the Nebraska Forest Service also deployed to assist with strategies, tactics and countermeasures. The Banner County, Scotts Bluff County roads departments and the Nebraska Department of Transportation has used heavy equipment to help establish containment lines around the fire. The Firefighter Ministry has been assisting by delivering food, water and supplies to the firefighters.

“Firefighters worked tirelessly to control and contain the Hackberry Fire,” said Type 3 Incident Commander Ralph Moul. “A full complement of staff arrived at the fire to support firefighters and minimize impact to landowners and homeowners in the area. The moderate drought and warmer weather patterns through the summer definitely fueled this fire.”

Incident command reported 20 volunteer fire departments with 120 fire engines on scene to work the wildfire. At the time of this writing, the Nebraska State Type 3 IMT is in the process of transitioning authority back to the Banner County Fire Department.