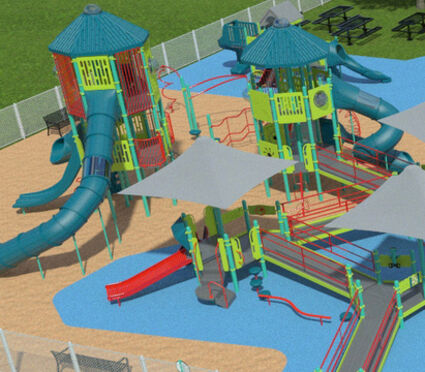 The Sidney City Council okayed a path in the Sept. 28 council meeting for the Sidney Park Project to apply for more grants.

The Sidney Park Project is an effort to upgrade the playground equipment at Legion Park. The concept is to improve the play equipment and apply a design with more accessibility for children and adults with mobility challenges.

Mayor Roger Gallaway said the application process is similar to what the City did for Hickory Street Square.

Wilkinson said the project has raised about $500,000 to date. Of that amount, $200,000 was donated by the Sidney Community Donor Advised Fund.

Originally, the anticipated cost of the new playground was about $650,000. That number has increased to a little more than $700,000 due in part to ta 240 percent increasing price of steel since last year. Wilkinson said recently the delivery materials has also caused a setback on the construction start date, from Memorial Day weekend to projected at July 3.

Fundraising for the project began in April 2021 and will continue through the coming months till February 2022, with hopes of most of the funding to be secured by the end of the year. Proceeds from a Movie Night at Peddler’s Corner with Sam and Louie’s on September 25th and the 5K/10K Oktoberfest Run October 2nd will be donated to the Park Project. The Sidney Park Project is hosting a Casino Night Event on New Years Eve at Hillside Golf Course. Look for tickets to go on sale soon.

The mission of the Sidney Park Project is to promote inclusion, exposure and exploration through play and to create a safe space with playground equipment and ground surfaces allowing all abilities and ages to come together to foster community and play.

“We would like to send a special thank you to everyone who has contributed to the project so far. We are grateful for the support of the community and the committee who have given this project life,” Wilkinson said recently.