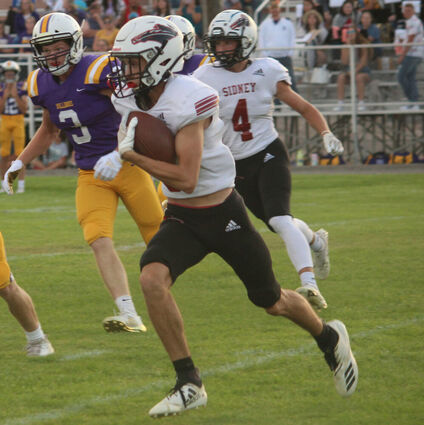 Sidney’s Red Raider Football team traveled Friday to Chadron to match up against the high-powered offense of the unbeaten Cardinals, and quickly fell behind on their way to a 35-to-6 defeat, their fourth loss in a row after opening the season with two straight wins.

The Cardinals got to work immediately in the game, when Chadron junior Xander Provance returned the opening kickoff 57 yards for a touchdown. Sidney junior Cam Leeling had a good return for the Raiders on the ensuing kickoff, but Sidney was unable to move the ball and punted.

Chadron started in good field position and drove the ball down to the Sidney 6 yard line. On fourth and five the Cardinals tried a trick play, but Sidney junior Austin Roelle was able penetrate and break up the play to force a turnover on downs.

Sidney started deep in their own territory, and on the second play from scrimmage disaster struck when senior Austin Wolf fumbled the ball going around the left end, and the ball was recovered by Chadron in the end zone for their second score of the the night.

Sidney got the ball back but again could not muster any offense, and Chadron took over in great position after a short punt by Isak Doty that was nearly blocked. Senior Dawson Dunbar galloped for 20 yards, then capped off the drive with an 18-yard touchdown run to give the Cardinals a comfortable 21-to-0 lead.

Sidney only threatened once in the first half, when they drove from their own 30 yard line to the Cardinals’ 9 yard line in a drive highlighted by a 38 yard pass reception from Doty to Patrick McCartney. But an illegal procedure penalty pushed the Raiders back and they turned the ball over on downs.

Chadron was able to take the last possession of the half down into Sidney territory and scored on a four-yard pass reception by Provance to go into the halftime up 28-to-0.

The second half had Chadron shutting down the Sidney offense while putting up another score of their own. Sidney’s only score of the night came on their final possession, a 82 yard 13 play drive that ended with senior Nathan Kennedy scoring on a seven yard run.

As expected, Chadron’s Dawson Dunbar was the Cardinals main offensive weapon, rushing 22 times for 197 yards, and the Chadron team rushed for 323 yards in total. Sidney ended with 189 total yards on offense, with Leeling leading with 11 carries for 52 yards. Sidney looks to get back on the winning track on Friday when they host the Gothenburg Swedes, who earned their first win of the season Friday night against Mitchell.