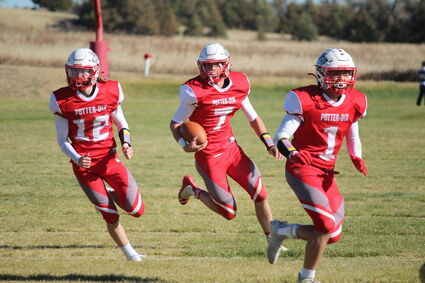 The Potter-Dix Coyotes are the number one ranked team in D6, and face the number 13 ranked Spalding Academy Shamrocks in the semi-final round of the NSAA D6 play offs on November 12 in Spalding. Due to the arcane formulas used by the NSAA, Potter-Dix will have to make the long journey east to Spalding, and if they win, they will face either Wallace or Cody Kilgore in Kearney on November 19 for the State Championship.

Spalding Academy features a run-heavy offense, led by seniors Dawson Murphy and Daniel Diessner. Both have rushed for over 1000 yards this season, with Diessner scoring 24 touchdowns and Murphy 15. As a team they have 45 touchdowns rushing.Murphy also lines up at quarterback, and has thrown for 879 yards and 11 touchdowns. Junior Caidyn Carraher also lines up at quarterback, with 360 yards passing and 11 touchdowns. They only scored 18 touchdowns through the air, with Diessner grabbing six through the season.

Comparatively, Potter-Dix has scored 43 rushing touchdowns and 39 receiving touchdowns. Close numbers on the rushing side, but a big difference scoring through the air. Luke Kasten is the only 1000 yard rusher on the Coyotes, with senior Jared Anton second at 911 yards. Potter-Dix defensively had 22 interceptions and 10 fumble recoveries, compared to 14 interceptions and six fumble recoveries for the Shamrocks.

The numbers compare favorably for Potter-Dix, however the variable is strength of schedule. Both teams have impressive records and many lopsided wins, but the Shamrocks have had to battle through a series of close games against quality opponents through the playoffs, with a one point win over Sterling in the first round and a seven point win against McCool Junction, last year's champions, in the second round. Again, it looks like this contest will line up as a typical West vs. East battle, with the Western team facing weaker opponents and the Eastern team having to play against stronger competition to get this far in the tournament.

Potter-Dix was stopped last year by a fast and strong Cody-Kilgore team that dialed up the speed and pressure higher than any team the Coyotes had faced during the season. This year, the Potter-Dix boys committed to working hard to make sure they were not going to let a lack of conditioning or weaker opponents handicap them in the playoffs. So far, they have more than fulfilled that commitment. If they can keep up the fast tempo of play and hustle for all four quarter, the Coyotes seem to have a definite edge against the Shamrocks, and look to advance to the Championship game against either a team they have already beaten this year in Wallace, or a team that they need to pay back for last year's defeat in the playoffs in Cody-Kilgore. Coach Frerichs and his boys have a big task ahead of them, but it is a task that they are well prepared for and have put in the effort to accomplish.