Cody-Kilgore Too Much for Potter-Dix in D6 Final 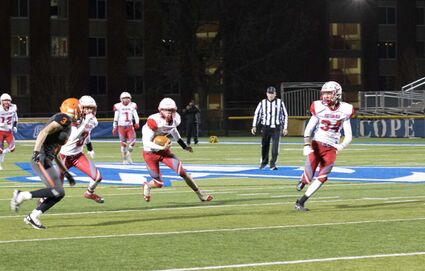 The historic season the Potter-Dix Coyote Football team enjoyed came to a disappointing end Friday night at Ron and Carol Cope Stadium at the University of Nebraska-Kearney, as they fell to the Cody-Kilgore Cowboys by a final score of 65-to-37.

The Coyotes’ historic run fell just short of a State Championship as the Cody-Kilgore running attack proved to be too much for the Coyotes to stop for four quarters.

The Potter-Dix team ends the season with an 11-and-1 record, a Runner-Up Trophy, and a host of team and league records reflecting on their successful season.

The accomplishment this team has achieved cannot be understated, considering the players who are seniors endured two one-win campaigns before the team turned itself around and had a breakthrough season last year, ending with a playoff quarter-final appearance. After last year’s disappointing loss to Cody Kilgore in the quarter-finals, the team was immediately back to the weight room and training for the next year, determined to make the next step and get Potter-Dix to a State Championship game. The work, practice and teamwork put in by the players and coaches brought them all to their destination Friday night, with one last hurdle in the Cody-Kilgore Cowboys to overcome for a State Title.

The weather conditions were favorable at kickoff, with mild temperatures and a slight breeze, and Potter-Dix elected to kick off after winning the coin toss. Senior Thomas Muldoon attempted an onside kick, but the Cowboys were able to recover with good field position.

Cody-Kilgore immediately started with their rushing attack and drove the ball, but on fourth down, Muldoon was able to get into the backfield and tackle senior Cactus Millar for a loss causing a turnover on downs.

Potter-Dix opened with a pass by junior Luke Kasten to sophomore Caden McConnell who took a group of Cowboy defenders for a ride and a Coyote first down.

The next play saw the Coyotes give the gain right back as Kasten was sacked for a twenty yard loss. But on the next play, Kasten was able to scramble and find a hole then cut through the defense for 50 yards and a touchdown, and with a good extra point kick by Muldoon, the Coyotes led 8-to-0.

Cody Kilgore responded immediately with a big run for a touchdown by senior Peyton Sterkel, but a missed kick kept Potter-Dix ahead, 8-to-6. Potter-Dix took over and had trouble moving the ball, then on third down sophomore Brayden Kasten was intercepted to stop the Coyote drive. A few plays later, the Cowboys scored on a play action pass to senior Gage Davis, one of two passes the Cowboys attempted the entire game, and took a 13-to-8 lead.

Potter-Dix knew they would have to respond to every score to keep in the game, and were able to successfully convert on their next drive with a touchdown catch by junior Zach Rotert to retake the lead at 16-to-13. Cody-Kilgore needed just three runs, then a fourth up the middle by Sterkel for a touchdown to take a 21-to-16 lead and start a 32 point unanswered scoring run  from the end of the second period through the third period to effectively put the game away for the Cowboys.

Potter-Dix finally broke the scoreless streak with 1:04 left in the third quarter when Muldoon reeled in a short touchdown pass from Luke Kasten.

Cody-Kilgore scored on seven of eight red zone chances, forced three interceptions and returned a fumble during a kickoff for a touchdown.

Peyton Sterkel led their rushing attack with 240 yards and five touchdowns. The Cowboys had 464 total yards, with 444 yards rushing.