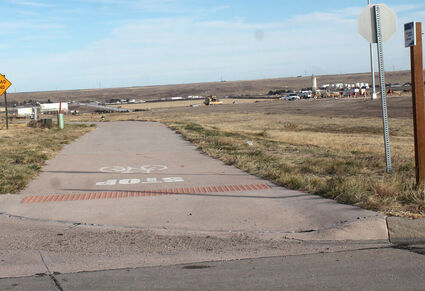 The Sidney City Council on Nov. 23 heard an update on a project designed to upgrade the trail system adjacent to East Old Post Road.

The project traces its history to a ½ percent Occupation Tax applied by Cabela's. Early this year, the Occupation Tax was defined with a balance of about $740,000. Initially, the council discussed how to use it, are there options on where to use it and what can be done with the balance.

The council recently contracted with Jason Nelke, president of Keep Sidney Beautiful (KSB) to write grants for the City in hopes of using the $700,000 toward more extensive expansion. In the Nov. 23 meeting, City Manager David Scott passed on an update from Nelke.

“I spoke with NDOT (Nebraska Department of Transportation) regarding funds for the FAST ACT and alternative transportation funds. They are expecting a call for projects to go out at the beginning of the year to municipalities, which gives plenty of time to iron out some details on this project,” Nelke said in his report.

He went on to say the alternative transportation program sounds like what the City needs. Nelke report said funds are available for sidewalks, cross walks and bicycle paths. Funds could also be available for a new recreational path around the city if plans can be completed by January/February.

The City has contracted with RDG Planning and Design, with offices in Omaha and Denver, at a cost of $30,000 to develop a proposal for improving the trail system, focusing on East Old Post Road.

Options discussed to date include expanding the existing trail system surrounding the Cabela's retail store to the hotels east of Cabela's, and a safe crossing method at the intersection of Old Post Road and the 17J Link.

The multi-use trail starts from the south at the south side of Sapp Bros. and travels north parallel to the 17J Link before turning left and traveling west toward the Western Nebraska Community College and ESU 13 campus and Deer Creek Run soccer fields and disc golf course.

City Manager Scott has discussed the safety of children walking to the public pool on Fort Sidney Road.

In an earlier meeting, RDG representatives discussed ways to link hotel guests near Interstate 80 with downtown Sidney. One suggestion is for bicycle rental stations at the hotels adjacent to Old Post Road.

The City also received a proposal from Economic Development Director Kim Matthews to contract with Five Rule Rural Planning to complete an overdue “Blight Study.” Cost of the study would not exceed $8,500. Matthews presentation said the Blight Study would be completed by Feb. 15, 2022. The Nebraska Department of Economic Development requires a blight study is conducted every 10 years. The last Blight Study was conducted in 1994.

Matthews said Panhandle Area Development District (PADD) no longer offers blight studies as a service. Additionally, the City will not be eligible for CDBG revitalization grants or implement the TIF redevelopment plan proposed without the Blight Study.

Five Rule Planning submitted a bid of $8,500 and the JEO Consulting Group, Inc., submitted a bid ranging from $14,500 to $18,700 with both bids offering “generally the same services and same completion date,” Matthews said in her proposal. A second bid event was held with only one bid submitted.