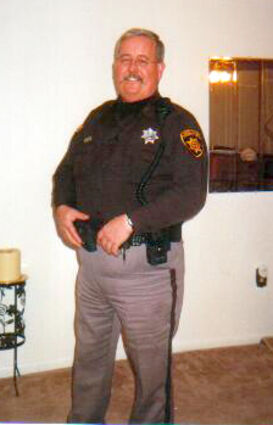 Dwight Kendall Pruss, 71, born December 24, 1950 in Alamosa, CO to Carl and Evelyn (Hof) Pruss, ran into the arms of Jesus on Jan 14, 2022, surrounded by his daughters. Dwight married Deanne Heidemann June 5, 1970 and they brought his 3 girls, the delights of his life, into this marriage. Dwight started his career in law enforcement with Denver Police Dept in 1970. The family then relocated to Potter, NE in 1978 & Dwight worked for his father-in-law in haying and hauling, then starting his own business shortly after. In the early 80’s he began working as a motor grader operator north of Potter, for Cheyenne County. He greatly enjoyed this job and the families he got to know on his route.

Following his divorce, Dwight then went back into law enforcement in 1993 working for Sidney PD as a Sargent. In 2001 he relocated to Chappell and worked for Deuel Co. Sheriff’s Dept until his retirement in 2009. Dwight will be infamously remembered for mentoring so many youth and young adults in his time of law enforcement. He had an abundant heart, was happy and always wanted to share how Jesus was his Savior and King. Other hobbies and highlights were guns, trains, cars, hunting and fishing. Dwight was always tinkering and was a scholar of so much useless information – he read and studied anything.

He left this life so quickly and unexpectedly leaving a void in the lives of his family and friends. He will be greatly missed, but he is living his best life with Jesus.

He was preceded in death by his parents and brother, Dennis Pruss.

By his request, celebration of life will be this Summer in southern Colorado with family where Dwight spent the happiest years of his childhood.

Online condolences may be left at Wyuka.com