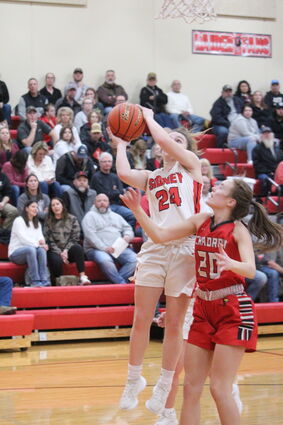 Sidney's Red Raider Basketball teams traveled north this weekend, first for a matchup with the Gering Bulldogs then for two games with Scottsbluff. Friday's games ended with a Sidney sweep of the Bulldogs only for the Red Raiders to be on the other end of a sweep Saturday by the Bearcats.

Friday's contest started with the girls' game, with Sidney having won an early January contest against the Lady Bulldogs at Sidney.

Gering looked for a fast start against the Lady Raiders, and played well in the first period, matching the Sidney scores and effectively navigating through the Lady Raider defense. Up 11-to-10 at the end of the first, the Lady Bulldogs then struggled to score in a defense-dominated second quarter. Sidney was able to pull ahead 20-to-17 at the half, and the third quarter was again a defense-heavy low scoring period. The teams battled in the fourth down the stretch, with Gering outscoring the Lady Raiders, but it wasn't enough to overcome the deficit, and the Lady Raiders ended the game in a 43-to-41 victory.

The Lady Raiders then looked to avenge an early-season loss to the 16-and-3 Lady Bearcats, and the game started with a scoring battle between the teams. Scottsbluff held a 28-to-20 advantage at the the end of the first period, leading to Sidney storming back with a 14-to-2 run to take a lead only to have Scottsbluff recover and the teams battle to a 47-to-47 tie at the halftime intermission.

Scottsbluff turned up the offense in the third quarter, piling up the points as the quarter wound down and taking a 73-to-57 lead into the fourth period. Sidney never threatened for the rest of the contest, and the Lady Raiders fell by a final score of 87-to-71. The high-scoring affair had junior Reese Riddle leading the scoring for Sidney with 26 points and two others in double-figures. Scottsbluff had four players in double-figures.

For the boys' team, the Red Raiders had no trouble breezing past Gering Friday night for the second time this season. The Raiders built up a big lead in the first half, then cruised the rest of the way for a 79-to-48 victory. On Saturday it was a different story for the Raiders, as Scottsbluff used a record-breaking outburst of 18 three-point hits to rack up an 87-to-49 victory against Sidney. 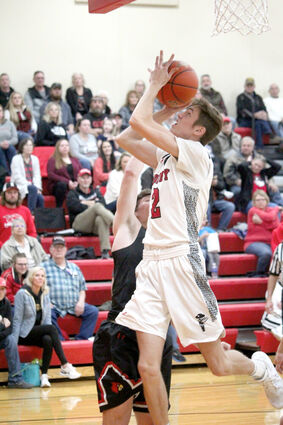 After outscoring Sidney in the first period, the Bearcats had a 26-to-8 second period to blow the game open and give the home team a 47-to-19 lead. The Bearcats extended their lead to 63-to-33 after the third period and then hit six three point shots in the fourth quarter to initiate the running clock and put the Raiders away by an 87-to-49 final score. Senior Sawyer Dickman led the Raiders with 21 points in the loss. Both teams have a final meeting with Scottsbluff in Sidney before they end their regular season campaigns.

After the week's action, the Lady Raiders moved their record to 16-and-5 and the Red Raiders to 14-and-7 on the season. The Red Raider teams are next in action on Friday, when they travel north again to match up with the Chadron Cardinals teams.