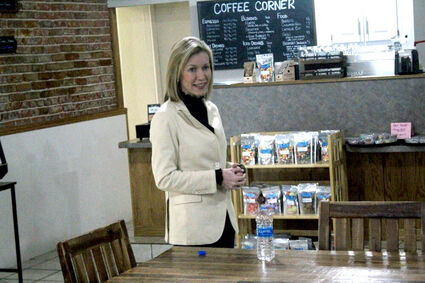 In late 2021, Theresa Thibodeau stepped away from the Charles W. Herbster campaign. On April 20, 2022, she stopped in Sidney to meet voters.

Thibodeau is in a field of nine seeking the top office in the state.

She stopped at the Coffee Corner in Highby Outdoors Wednesday for a question and answer session with voters.

Thibodeau calls herself “an experienced entrepreneur who knows what it is like to work hard, build a business from the ground up, and navigate the complexities of government bureaucracies,” according to her campaign website. In 2014, she opened Primrose School of LaVista, a program that focused on early childhood development. When COVID hit, she had 185 students and 48 teachers. As other childcare centers, she was mandated to reduce her numbers. Even with the mandated reduction, she maintained staff to provide the service to the community.

In her meet and greet in Sidney, she said 15 percent of Nebraska's childcare centers have been shut down because of COVID.

She also talked about the impact of property taxes.

“Tax reform is at the top of my agenda,” she says.

She says every gubernatorial candidate for 40 years has also claimed interest in tax reform. She says nothing is getting done because Nebraska is controlled by special interests. She says she can cause change because she is motivated.

“I’m a mom and a small business owner. I have to make things happen every single day, or my kids and business suffer,” she says.

The relationship between local school boards and the Nebraska Department of Education has been discussed on several platforms recently. Thibodeau told those present at the Coffee Corner the NDE wants to give curriculum to childcare centers.

“That was being supported by Health and Human Services (HHS),” she said.

In isidewith.com, Thibodeau said critical race theory should be part of K-12 education.

In the Sidney event, she was asked about local board control as opposed to state oversight.

“I like local control, but when local control infringes on constitutional rights, its time for the state to step in,” she said.

She said she is concerned with the low performance percentages of state students, and of the level of sex education taught in schools. Additionally, teachers do not always feel free to speak.

“Teachers will be fired if they speak up,” she said.

She says she is standing up for local, federal freedoms, and wants to look at where a governor can take a stand.

She says she will stay focused on the state of Nebraska, and intends on implementing a rotating schedule on where she will be throughout the state.