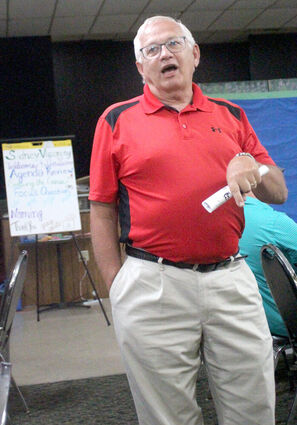 What would your home town look like if you weren't concerned about your checkbook, an investor who could absorb some of the risk? Would you be big and bold?

Would you have live music in the park seven months of the year, a sports complex that would draw attention from east Nebraska and three neighboring states, or would you be tempted to restrict your dreams to what you think can be accomplished?

On Aug. 2, a community meeting was held at the Sidney Elks Lodge to discuss what Sidney could look like if money is not considered.

The meeting started with each person in attendance offering their name and a one-word positive description of the community. Descriptions varied from safe to resilient and good work ethic.

“Tonight is about dreaming big,” said Jana Jenson. “It's all about what we want Sidney to look like in three, five years.”

Jenson is the Affiliated Fund Development Coordinator for the Nebraska Community Foundation.

She said visionary sessions like Sidney's Aug. 2 meeting is one of the first steps in forming a community foundation.

“People want to give. If there's not a depository, what are they going to do?” Jenson asked.

She said it takes funds for make a dream reality.

“We have to have money to do great things in our community,” she said.

Wendall Gaston, local representative of the Sidney Community Donor-Advised Fund, an affiliated fund of Nebraska Community Foundation, said this stage is two years in the making.

“I've been working on this for two years. What most people don't know is we have a lot of people who are very charitable,” he said.

He said the foundation he represents has given away $3 million in the last two years.

However, it is a private foundation; no more supporters can be accepted. That is where a proposed new giving option was discussed.

Gaston said that while that fund has done some impactful work, there is not a way to accept additional donations, including planned giving. He added that creating an Affiliated Fund (not a foundation) would allow for those donations as well as flexibility and with local decision-making.