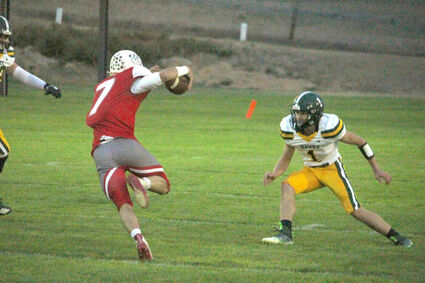 It's still early in the season, and again the Potter-Dix Coyote Football team is searching for an opponent that can give them a competitive contest. During last year's regular season, the Coyotes smallest margin of victory was 18 points against the Arthur County Wolves. This year Arthur County is not on the schedule, so it is likely that the Potter-Dix faithful will have to settle for lopsided games until playoff time rolls around.

After winning their first game against Minatare 85-to-6 then their second game 91-to-6 against Crawford, the Hay Springs Hawks came into Potter Friday night with the unenviable task of trying to slow down the high scoring Coyote offense. The Hawks, like Potter-Dix's previous opponents, failed.

Potter-Dix spotted the Hawks good field position to start the game when they tried a squibb kick, but the Hawks recovered and started their first offensive drive near mid-field. A few runs, a short pass and a penalty got the Hawks into scoring position. A holding penalty moved back the Hay Springs offense, but it did not matter as sophomore quarterback Dylan Young was able to find sophomore receiver Dylan Raymer open and connected for a 26 yard scoring pass. The extra point was no good, and Hay Springs had an early lead.

Potter-Dix then received the ball, and within a few plays senior Luke Kasten had broken open some big runs, and a 26 yard touchdown run and converted extra point gave the Coyotes a 7-to-6 lead. Hay Springs next possession went nowhere, and after punting the Coyotes back into their own territory, junior quarterback Brayden Kasten broke open a big 50 yard run for a touchdown. Brayden Kasten then found senior Alex Anton for the extra point, and the Coyotes were up 14-to-6. However, Hay Springs was able to drive and score, with junior Gage Mintken rushing for a touchdown and a two point conversion knotted the score at 14-to-14 at the end of the first period.

But that would be all the offense the Hawks would muster, as the Potter-Dix defense took over and disrupted the Hawks offense. The Coyotes pressured quarterback Dylan Young all night and generated two fumbles and an interception. Potter-Dix scored 19 points in the second quarter to take a 33-to-14 lead at the half. In the second half, the Coyote defense again stopped the Hawks cold, and by the end of the third quarter the Coyotes had put twenty more points on the board, enabling the running clock and getting in substitutions for the remainder of the game. The Coyotes put up 12 more points in the fourth quarter, ending the game with a 65-to-14 victory.

Potter-Dix next travels to Harrison on Friday for an afternoon matchup against the Sioux County Warriors, who are coming off a loss to Wauneta-Palisade. Kickoff is set for 2 p.m.