2021 Music Evangelist of the Year Sings for Sidney 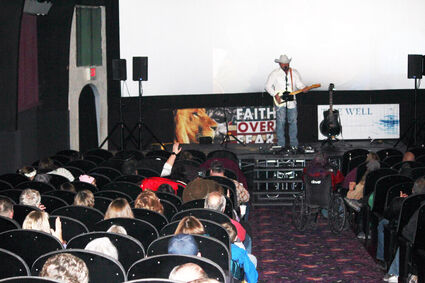 Multi-award winning ICMA artist Justin Todd Herod came to Sidney Saturday night and played a free concert sponsored by The Well Church of Sidney and the Fox Theater for over 150 people.

The Well Church in Sidney and the Fox Theater hosted the multi-award winning musician Justin Todd Herod Saturday night. It was a well-attended evening of country music with a Christian message that was thoroughly enjoyed by the Sidney community.

Herod is well-known in the Inspirational Country Music world, winning ICMA Nashville Musician of the Year in 2017 and 2018. Herod has many well-known hit songs including, "Be Still" and "Songs I Wish I'd Wrote", and has a devoted following around the United States.

Hailing from Palestine, Texas, one look at Herod tells you this is a real Texas native with a story to tell. "Positive Country" is how he describes his music, authentic classic country music that resonates through lyrics reflecting on life-lessons and the need to know the love of Jesus Christ.

Herod's father was a nightclub performer and sang country music, and there were some tough times because of that. He said, "I got to sing and play with the band when I was a kid, which sounds great to some people , but I should have been doing what a kid should do, like play little league baseball. But it did give me my love for music, and coming out of a musical family, it did give me a way to express myself and try to be somebody." In third grade he won a poetry contest, and his teacher told him he had a knack for writing, so with that encouragement he started to write songs at a young age. "We had a piano in the house and my Mom would yell at me to stop banging on the keys, but after time she started to notice that I was actually starting to figure stuff out, so she asked me if I wanted to take lessons. I had a good piano teacher, but I had to make a choice between learning how to play "right", or playing what I liked and wanted to hear. So I really don't have much formal training but I have a good ear and could figure things out," Herod remembered.

He soon bought a basic acoustic guitar from Montgomery Ward's and starting learning songs from singer-songwriters of the time like Jim Croce and John Denver. "I loved those guys," said Herod. " I wanted to be like them, a guitar player that could sit on a stool and sing, so that's what started me on that path."

He developed into a singer-songwriter, but never left his roots and maintained his country influences. In the 1980s into the 1990s, Herod played with a number of country bands as a singer and guitarist, and started to experience life on the road as a country musician. "I met a lot of very good people out there in the nightclub circuit, but I wasn't living for the Lord," he said. "I had a very big consciousness of God, and knew about God and that He had a plan for my life because of the influence of my mother, who was very Christian. My Dad went from being a nightclub performer and a cowboy to a Baptist preacher, which was an amazing transformation. But I was working the nightclubs and I had my own identity which is important to a musician, and it brought me popularity which brought some success and good things, but it also took me down some very bad roads, with alcohol and stuff like that."

The catalyst for change in Herod's life came at 27 years old and the birth of his first son. "I'll never forget it, I came home from the club, and he was like seven days old, and then the Lord spoke to me about my life, like He was giving me an ultimatum, and then I saw just more than just a baby or my progeny. He needs you. He needs you to quit this stuff."

Herod took the message to heart and acted upon it. He stopped playing the nightclubs, sold his outfits, gave away his many pairs of boots, and started pouring concrete and working construction. But he never stopped playing guitar and writing songs. He started writing songs about his life and experiences, and sent his songs to publishing houses. He did not necessarily want to be a singer, he just wanted to write.

His attempt to break into the Nashville scene with his

songs didn't work out, because publishers were trying to fit him into a "country" mold while his songs were more "gospel". "The said that my songs were too Jesus-ey," he chuckled. But the experience did provide motivation, since all of the publishers were saying his songs were good, but it was just wasn't what they were looking for. "I had a really bad problem with self-confidence, but if they thought I was OK, then maybe I am. But the next two years of my life were a journey that I would wish on no person," he said.

With no connections, and no money, he went out and started singing anywhere he could. "Flea markets, Wal-Mart parking lots, in front of dollar stores-anyplace that would have me. Finally the church world, especially the Cowboy Church world heard about me a brought me in. At first I wouldn't even look at them, I would just look at the floor and sing, but people loved the songs," he said.

"First two years, I just jumped on the bus, no money, no manager, and just played wherever I could. I always tell people if you have a dream or something you're called to do-it may not be easy, but you know you have to do it. I primarily wanted to be a songwriter, I wanted to write about real things, real people and real events. My music wasn't trendy, it was darker and had a message and really meant something to me. I think that's why I was never signed to a major label. But I am happy to be performing where I can and with people who love the music and the message. That's what really important. It's just as important to me to be playing here then at the Grand Ol' Opry, and I've played there before."

With the spirit of a true artist and musician, Herod and his wife, Rainee and family travel the country performing everywhere the message needs to be heard. Herod says some of his best shows and audiences have been in prisons, which he regularly visits to entertain and make sure the incarcerated know that they matter to Jesus.

Herod's show was enlightening and entertaining at the same time, and his vulnerability and ability to bond with the audience gave the event a true feeling of community and sharing an experience. Herod is extremely personable and engaging with the audience, with no barriers between artist and listener, and his songs are relatable to all of us who struggle, persevere and then thrive through our faith.

Herod left the Fox Theater and his show will next be going up to Maine. There's a lot of snow going on in the area, but there's no doubt that Herod will make it to the next stop to entertain and bring the warmth of his music and message to the world.