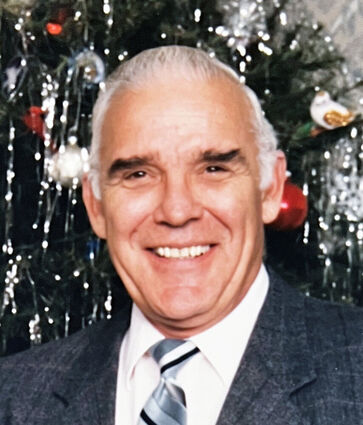 November 15th, he was 87. Vince was born in Sidney, Nebraska and was the youngest of 7 siblings--5 brothers and one sister. He grew up on a farm just outside of Sidney where he developed his strong work ethic and learned the importance of a close-knit family rooted in faith. He graduated high school from Sidney St. Pat's in 1953 excelling in both academics and sports, mainly basketball and football.

Vince went off to college to play football and one summer day, Bob Devaney, who at the time was head football coach for the Wyoming Cowboys, came to the farm to talk to Vince. His father was not very impressed and quickly explained they should really get back to work-which Vince turned into a life lesson on missed opportunities. Shortly thereafter, Vince was drafted into the army and served in Germany. Upon returning from duty, he enrolled at the University of Nebraska to study electrical engineering.

On a break from school one night, Vince and his brother Henry went to Peetz, Colorado for an ice-skating party (still can't figure that one out) where he met Gloria, the love of his life. They soon married and moved to Denver where he worked in the Aerospace business for the Martin Company. After having Nora, Julie and Vince, they decided to move to Kimball Nebraska so they could raise their family in a small-town atmosphere similar to their own upbringing. Ginny and Henry came shortly thereafter and the family was complete. Vince's love, devotion and commitment to his wife and children created a strong, loving, faith-filled family that continually grows and thrives with each new addition. Vince exemplified the commitment of unconditional love and support through all adversity, as well as all successes.

Vince and Gloria's entrepreneurial spirit led to three successful enterprises over the years: The C & R Bar, Vince's Lounge, and Vince's Corner. These enterprises returned many life-long friendships from all walks of life. He had a unique ability to develop strong, personal relationships with all generations, ages and personalities making everyone feel special; he loved people and welcomed all. Vince sponsored teams, promoted the community, and supported many, many school activities, including feeding the high school football team on game days!

Vince fell in love with the Kimball community and was visible in a number of activities: Volunteer Fireman, baseball and softball coach, avid golfer and supporter of all school and community events. He loved to have fun but first wanted to make sure his friends were going to have a good time. Vince was a huge Big Red fan and attended many games creating cherished memories with both family and friends – of course the last 20 years of Husker football created many heart-breaking memories for Vince and the rest of Husker nation. He was an active member of the St. Joseph's parish in Kimball and also still supported most activities at St Pat's. Vince was a man of incredibly strong faith and devotion to his family and will be missed by many.

He is preceded in death by his parents Martin and Nora, his five brothers and one sister, several in-laws, two nieces,one granddaughter (Lexi), and many friends.

Funeral Mass at St. Joseph's Catholic Church at 1:00 pm on Saturday November 19, 2022 followed by a celebration of life at the Sagebrush in Kimball.

Memorials may be made in care of the family for the benefit of the Four Winds Golf Course, Kimball Volunteer Fire Department, and Kimball Health Services.

He was simply the BEST Dad and husband! We know we were blessed beyond measure. Thanks, Dad, for all the sacrifices, commitment, life lessons, unconditional love and support, and a strong and absolute faith in GOD that gave us the GREATEST FAMILY ever! We love you and look for the day we will all be together again in HIS GLORY!!