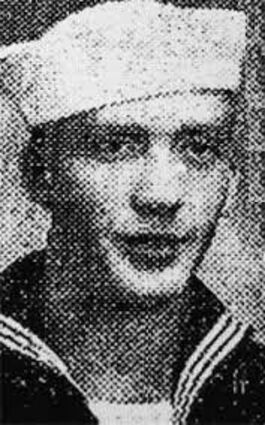 I received a phone call on Monday from Jacquin Coxon, a former Sidney resident with a very deep connection to the community. The 93 year-old Ms. Coxon was calling from a senior residence in Loveland, Colo., to talk about her step-brother Myron Eugene Goodwin. Goodwin was the first Cheyenne County casualty of World War II. He was killed in action on December 7, 1941 aboard the U.S.S.West Virginia when the Japanese attacked Pearl Harbor.

She told me how Myron would have been 102 years old now if he had lived, and how he ended up joining the Navy prior to the start of World War II. After graduating high school, Goodwin joined the Navy, for a number of specific reasons. First, he had been in a roller skating accident and knocked out his front teeth, and knew the Navy would fix them. He also was interested in the printing industry, and the Navy could provide training for him that would help him in a career. Lastly, Coxon recounted how his father, "didn't want to be a Pool Bum...hanging around at the Pool Hall doing nothing all day" and he'd be better off joining the Navy. Myron's father's worked as a printer for the Sidney Telegraph, and since Myron was looking to follow in his father's footsteps, he took the advice and joined the Navy.

Ms. Coxon recalled how former long time editor and publisher of the Sidney Telegraph, Jack Rowe, received the telegram at the Telegraph's office that Myron was listed as missing in action after the attack on Pearl Harbor. About a month later, Goodwin's body was able to be identified, ironically through the dental work the Navy had provided. The family had moved to Gering, with too many sad memories of Myron in Sidney to deal with, it was best to move on by moving away. Myron's remains were then interred in Gering.

Jacquin recalled that for the 50th Anniversary of Pearl Harbor, a plaque in Myron's honor was added in Legion Park, and how she came back to Sidney for the ceremony to honor Myron. "Myron was the sweetest person and a good man. There were so many classmates of Myron's from the Class of 1939 at the ceremony, and we talked and reminisced about Myron and the times we had, it was wonderful. It was a great honor and it meant the world to me to see Myron remembered and honored like that," she said.

As we lose the last of the World War II generation to old age, it is important to remember the heartbreaking sacrifices and hardships our ancestors faced, and how they retained their stoicism and dignity in the face of these challenges. For all of our modern problems, sometimes we can look to our ancestors and learn from the hard lessons they had to endure before we create our own tragedies in the future.