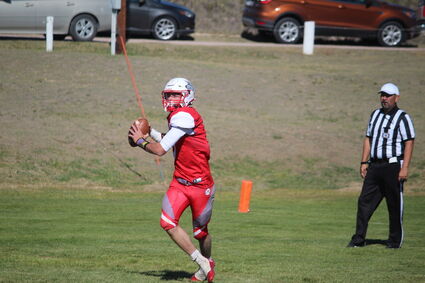 The head football coach at Potter-Dix High School, Dale Frerichs, knows he's a fortunate fellow.  The past three years his Coyotes have won 29 of their 32 games, while the previous three they were 3-21 and one of the three wins from 2017-2019 was a forfeit.

Has Dale Frerichs been a much better coach the last three years than he was the first three? Maybe not, but because he had much better players, he's led them to new heights that turned Potter-Dix into one of the best 6-man teams in the state. He also made some decisions about where to play his most talented player that turned out right.

The reversal has been led by Luke Kasten, who in his coach's words: "He could have been the best player on our team at any position as well as one of the best in the whole region and even the state."

No doubt about it, Luke Kasten, who is 6-foot-3, 190 pounds and won both the 100 and 200 meters at the Class D-9 District Track Meet last spring, has been a game-changer. He didn't do it so much as a freshman in the fall of 2019. The Coyotes were just 1-7 again that season. But he was the starting quarterback and, despite missing two games because of injuries, completed 44 of 98 passes for 763 yards and 11 touchdowns. He also was the team's leading rusher with 53 carries for 396 yards, an average of 7.5 yards.

What followed has been spectacular.

With Kasten playing quarterback again, the Coyotes were 9-1 in 2020, losing only to Cody-Kilgore in the second round of the state playoffs. He completed 83 of 154 passes for 1,746 yards and 32 touchdowns while also running with the ball 70 times for 797 yards for an 11.4-yard average and 12 TDs.

Frerichs, a Lodgepole native and a 2002 Chadron State College graduate whose first coaching experience was with the Chadron Middle School gridders while he was attending CSC, had a decision to make between the end of the 2020 season and the start of the 2021 schedule.

Should his star signal caller remain at that position or move? Luke Kasten moved because his cousin, Brayden Kasten, who is one year younger, appeared capable of doing well at QB, giving Luke more space to roam.

The decision paid off. Brayden led the western Nebraska 6-man quarterbacks by completing 71 of 109 passes for 1,170 yards and 33 touchdowns. Luke, meanwhile, rushed 107 times for 1,128 yards (10.5-yard average) and caught 23 passes for 493 yards and finished the season scoring 25 touchdowns.

Oh, yes, just to mix things up a bit, Frerichs, allowed Luke to throw the ball on occasion. He completed 36 of 60 aerials for 493 yards and eight TDs.

The Coyotes went 11-1 in 2021, losing only to Cody-Kilgore 65-37 in the 6-man state championship game. The Cowboys were extra special a year ago. Huskerland Prep publisher Bob Jensen called them "One of Six-Man's all-time greatest teams, no doubt."

With the Karsten cousins returning, everybody knew Potter-Dix would have another juggernaut this fall. The season didn't last quite as long as was hoped, but the Coyotes outscored their first nine opponents by a 705 to 137 margin before losing in the second round of the playoffs to Pawnee City by a 62-47 score.

The amazing thing about the Coyotes' passing game this fall was that none of their combined 134 tosses was intercepted. However, they swiped 25 of the rivals' passes, six of them by both Brayden Kasten and freshman Dylan Tabor and five by senior Alex Anton.

Lots of players have helped make the Potter-Dix rags-to-riches story happen. For instance, in 2021, seniors Thomas Muldoon at offensive end and Jared Anton at defensive back joined Luke Kasten as 6-man first-team all-staters. Muldoon caught 29 passes for 501 yards for 13 touchdowns and intercepted 11 passes while Anton participated in 129 tackles.

Like nearly all 6-man players, Luke Kasten also played defense. And, like everything else he does, he played it extra well. He led the Coyotes in tackles as a sophomore with 124. Frerichs said Luke began his time on defense as a back, but was a linebacker as a sophomore and one of the two linemen as a junior.

That was another good move. He participated in 120 tackles that season, 35 of them behind the line of scrimmage, including 17 ½ that were quarterback sacks. This past season, when the Coyotes played three fewer games, he was again stationed at tackle and was credited with 88 total stops, 13 ½ of them sacks.

And, after being an all-state running back as a junior, the Coaches Association tabbed him as an all-state defensive lineman this year and named him the Defensive Player of the Year.

Huskerland Prep took it one step farther. It pegged him one of its six Players of the Year, an honor that goes to a standout from each class below A. The other honorees are Trey Bird of Bennington, Ben Brahmer of Pierce, Kade Pieper of Norfolk Catholic, Aiden Kuester of Neligh-Oakdale and Keegan Shuler of Hitchcock County at Trenton.

Here's what Huskerland Prep's Bob Jensen wrote about Kasten: "His team came up short of a second straight state final but Luke continued to dominate the game, finishing with 1,671 yards and 37 rushing TDs and 88 tackles, 13.5 sacks on defense. If there's a hole in his resume it is that 45 of those tackles weren't for loss. The other 43 were."

Much has already been said about Kasten, but he's deserving of another plaudit. He began the 2022-23 basketball season with 1,305 points the past three years, putting him 30th on the list of 91 all-time leading male basketball players in the Panhandle. He tallied 480 of those points last year. If he hits that number again this year, he will be move up to third on the list.

Coach Frerichs summarized what he thinks of his all-star. He calls him "a great person" who is a natural leader and a tremendous teammate who always encouraged them to play their best.

"We'll miss him next year, that's for sure," the coach said, adding that Luke either ran for, threw for or was on the receiving end of 142 touchdowns the past four years.

Frerichs will have one more chance to coach him. Last week it was announced the Frerichs has been named the head coach of the West Team in the Western Nebraska All-Star Game on June 10 in Scottsbluff. It will be interesting to see what position Kasten plays. Maybe he'll see action at several of them.

Of course, there were other outstanding six-man players in the region this fall besides Luke Kasten.

Garden County's Johnny Vargas was another versatile senior. He rushed 126 times for 916 yards (7.3 per carry) and 11 TDs, and also threw for 535 yards and another 11 scores while playing in just seven games. In addition, he was the Eagles' leading tackler by a wide margin, making 84 stops, 51 of them solos. He also was placed on the 6-man all-state team for 2022.

Another standout was Hay Springs junior Gage Mintken, who helped the Hawks win their last four regular-season games, including a 34-28 decision over defending state champ Cody-Kilgore, and then topple the Cowboys again 28-12 in the first-round of the playoffs.

Mintken was by far the West's busiest 6-man ball carrier with 188 rushes for 1,253 yards, for a 6.7-yard average, and 27 touchdowns. He also caught 19 passes for 264 yards and five more TDs, besides leading the Green and Gold with 92 tackles, two-thirds of them unassisted.

Another of the Hawks, had an excellent season. Sophomore Dylan Young completed 59 of 106 passes for 882 yards and 12 touchdowns. He also intercepted seven passes while throwing just three tosses that were picked off. Senior Toby Scherbarth will be missed. He participated in 75 tackles and had four sacks.

Although he expects to have another competitive team next season, Frerichs said the Hawks, who had just on senior besides Scherbarth on this year's roster, could be the 6-man team to beat in the Panhandle in 2023. Crawford with no seniors, South Platte with only one and Sioux County with just two are among other teams that expect to be improved next fall. Stay tuned.