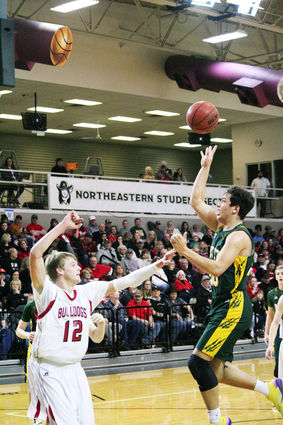 Peetz senior Bryson Long has the right touch as he scores two points during the Bulldog's loss to Haxtun at the Regional Finals on Saturday.

Peetz's Bulldog boy's basketball team was unable to follow up on their 2017-18 Class 1A State Championship, falling short in this year's Regional Tournament in the finals against Haxtun. Although unable to defend their state title, the Bulldogs had a very successful year, compiling a 17-and-6 record (7-and-1 in league), earning runner-up honors at the District Tournament, and a Regional Finals appearance.

After losing to Merino in the districts, the Bulldogs needed to take a slightly more difficult path into the regionals, not qualifying for a bye in the first round. The Bulldogs were match...