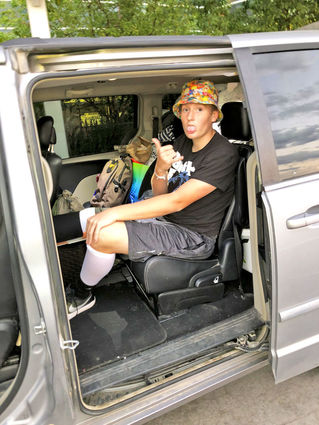 Loaded up and ready to return home, Drew Haley still has time for a funny gesture to those saying goodbye. Haley and his family came back to Nebraska this week following an 18-day stint at the University of Colorado medical center.

Haley, a junior at Leyton High School, was injured in the school's football season opener when his knee was twisted on a tackle following a high-reaching catch.

Two days later it was discovered the injury included severe damage to the main artery that supplies the lower leg. At that time, he was flown to University of Colorado Hospital where it was determined the lower leg could not be saved.

In the days since, Haley underwent six surgeries in 12 d...